The Gubeikou section of the Great Wall is appealing for two main reasons: it has never been reconstructed, thus it has retained its original identity; and (best of all) it isn’t a tourist hot spot.

It is an enjoyable hike with a variety of trails – some paths snake along the Wall, while others delve into the valley. Our journey from the city to the Wall was almost entirely by public transportation, starting at Dongzhimen bus station.

To get to Gubeikou where the trail begins, we took the No. 890 express bus to Miyun and then bus No. 25 on to Gubeikou. At the Dongzhimen bus station, the female staff tried to convince us that our only option to reach the Wall was a “black car” (unregistered taxi) from Miyun. Eager to help, she scribbled some directions on a piece of paper for us. Such hospitality – and all before we had even left the city center! However, we soon suspected she might have some connection to the “black car” driver after seeing she had written her name on our “directions.”

Once the bus reached the first stop just outside of Miyun, a woman climbed aboard looking for tourists. She tried to get us to join her minibus, but we shooed her away and stayed with our faithful public transportation route. We asked the bus driver where Bus 25 to Gubeikou departed, and he kindly told us where to get off.

An hour later, we arrived at Gubeikou. It consists of a main street with a couple of side-streets. We headed north past a big police checkpoint, and found the trail about 500 meters ahead. On the left (west) side of the road was Wohushan, while on the right (east) side was the side we wanted: the Panlongshan section.

The side-street next to the gray building pictured above marked the start of our trail. We followed a little road flanked by houses, leaving the town behind as we headed east. After 15 or 2o minutes, we reached a house with two dogs whose barking was less-than-friendly. It was sad – yet also a relief – to know they were chained a safe distance away. Nevertheless, I picked up a rock to defend ourselves just in case.

I couldn’t see where the trail continued, so I yelled “ni hao” a couple of times to see if there was anyone in the house. After a while, a man walked out and gestured for us to continue along the left side of his house – right between the two dogs. It was awkward politely asking the villager for directions while still holding the rock. Hopefully, you won’t have to encounter the same dogs on your hike. 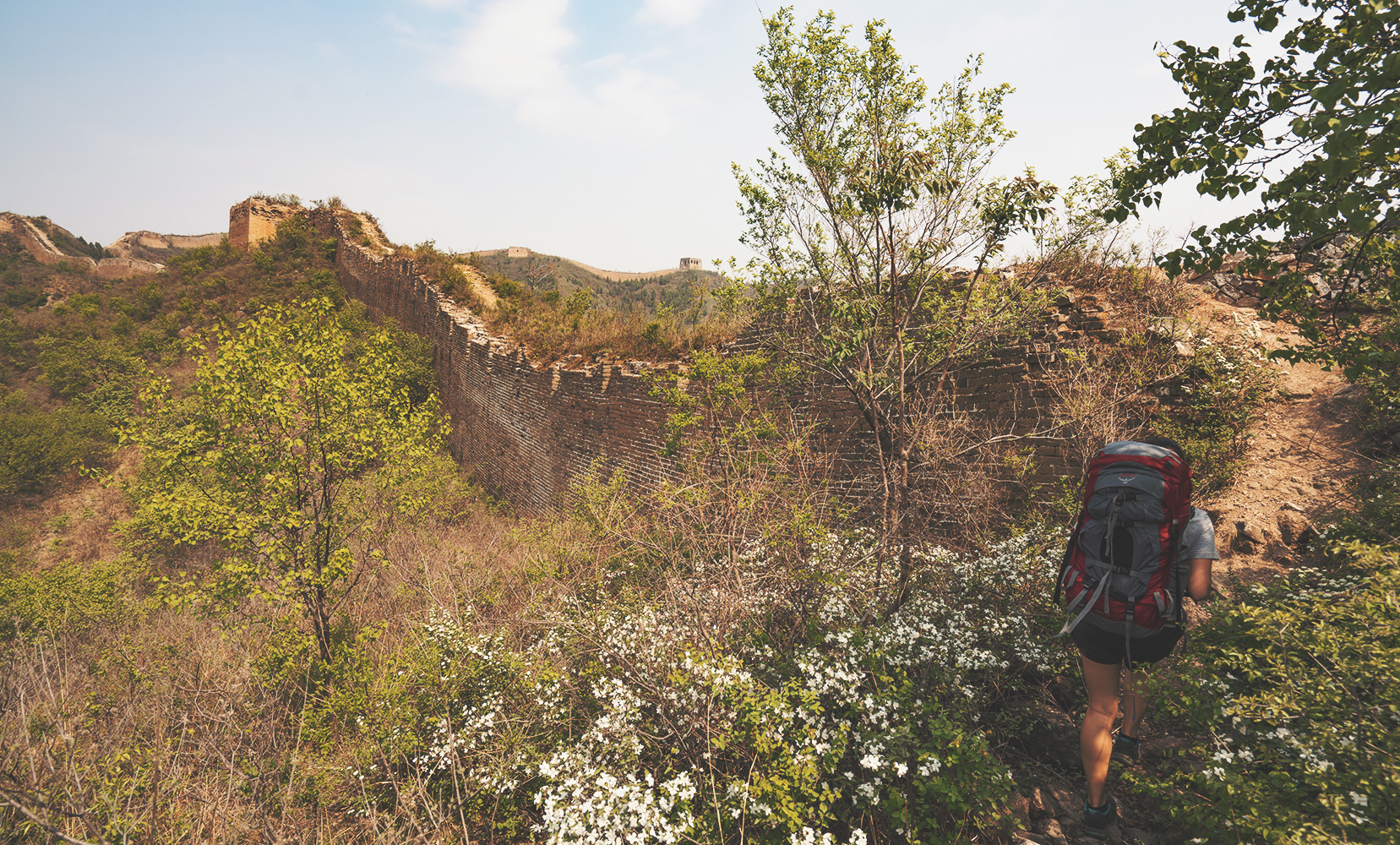 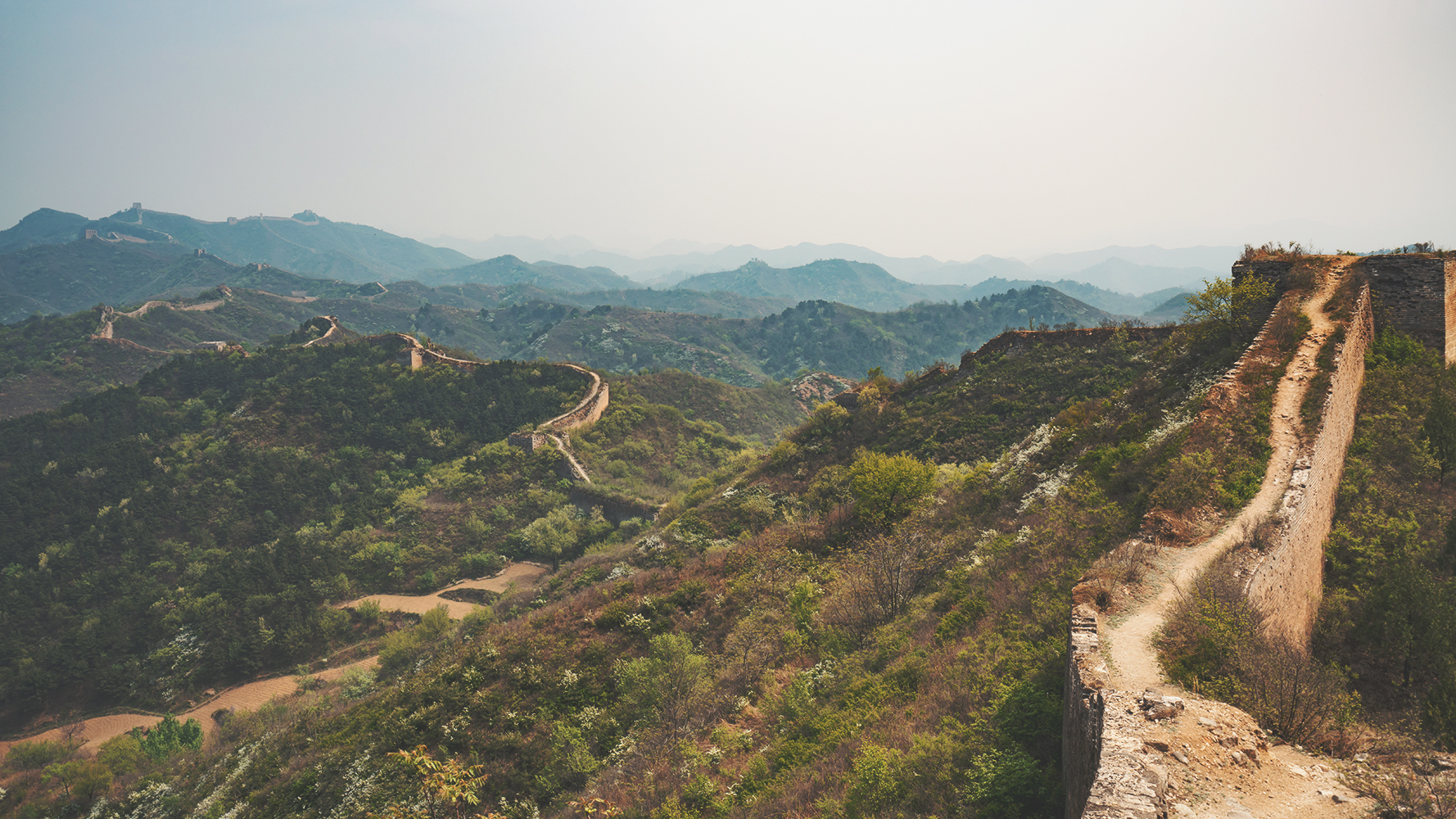 The walk along this section of the Wall is relatively easy and flat. Detours and the trail are both well-marked with signs or landmarks left by previous hikers. These are particularly helpful and include colored points on rocks, bottles on tree branches, and red cloths. They aren’t always clear, but figuring out the way is part of the adventure. 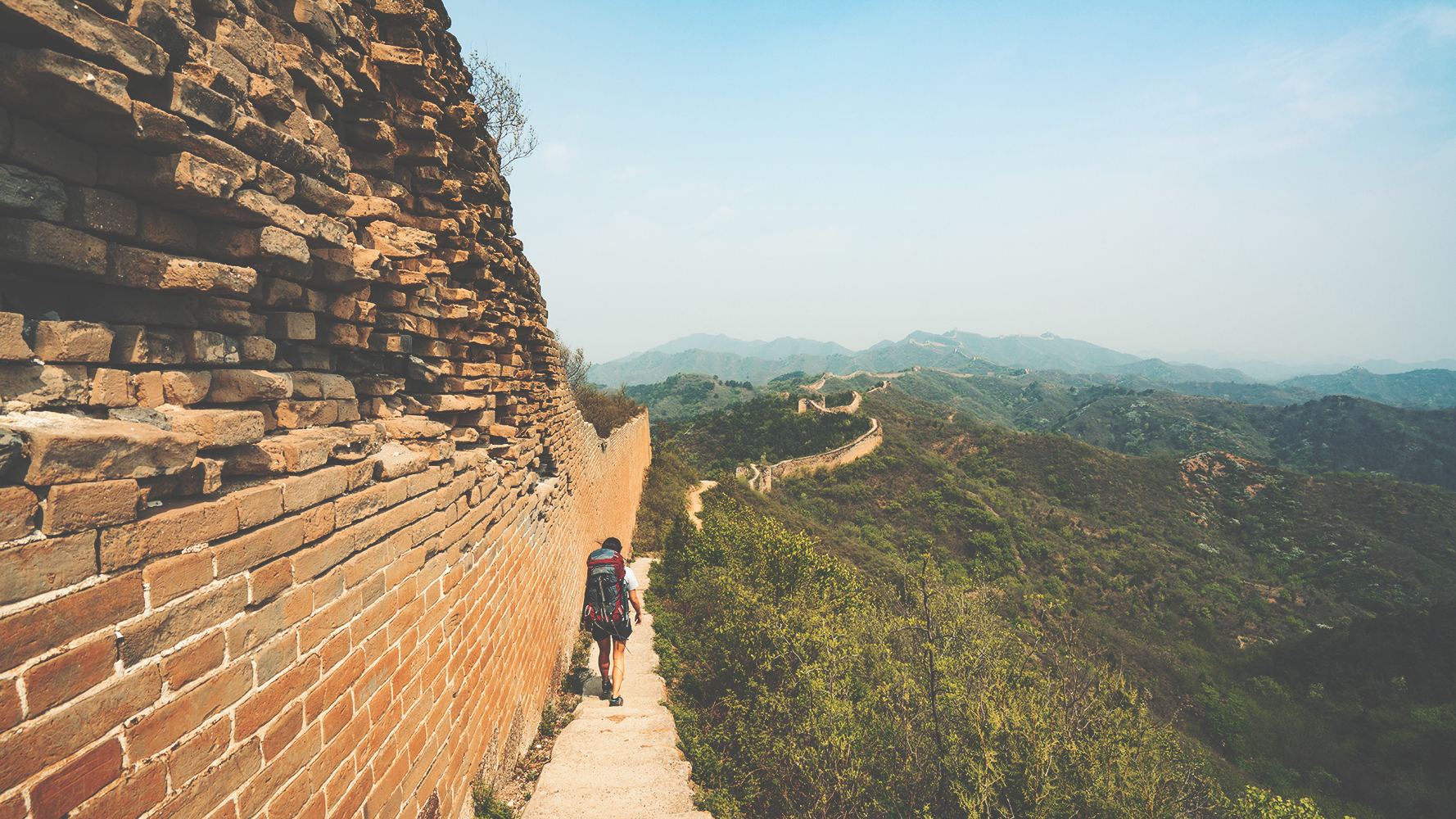 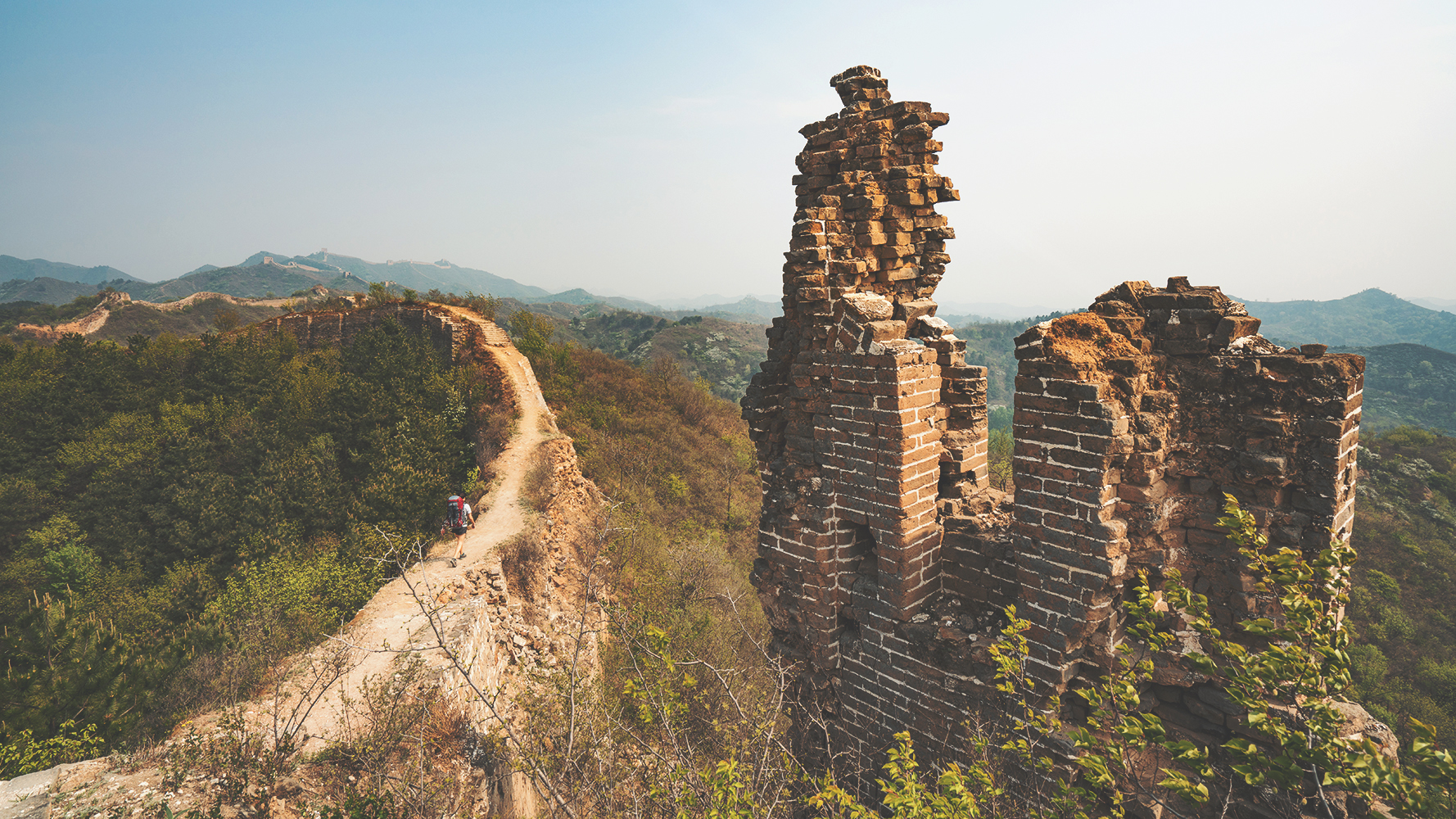 After reaching the fortified section, we had to take a detour through a well-signed path. I was thankful to have different terrain under my feet as we walked past vegetation and some crops. A mysterious, old hutch along the way provided the perfect location to rest and refresh for a while. 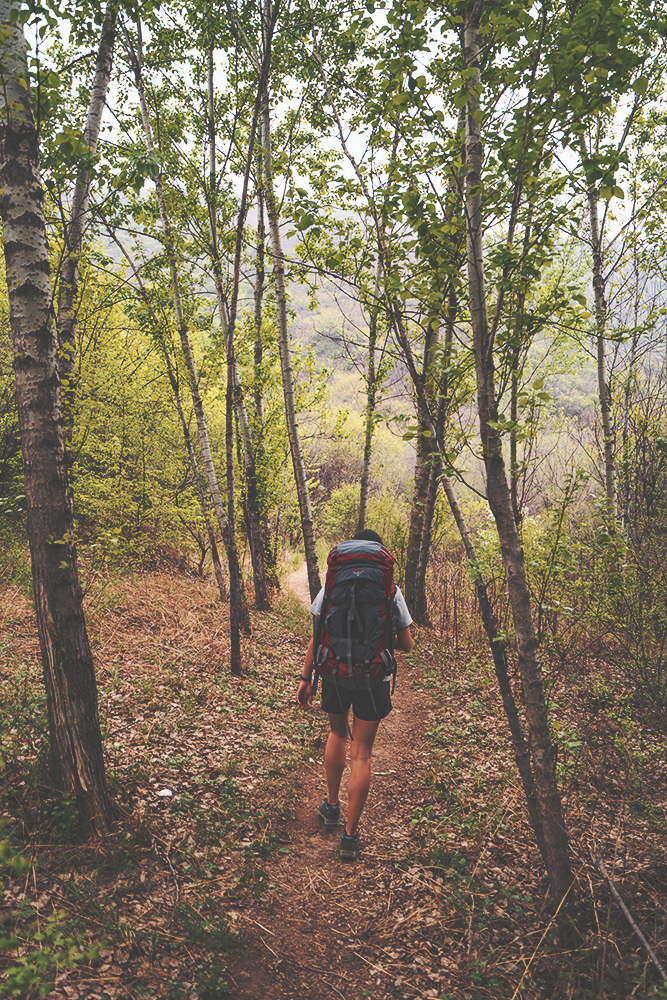 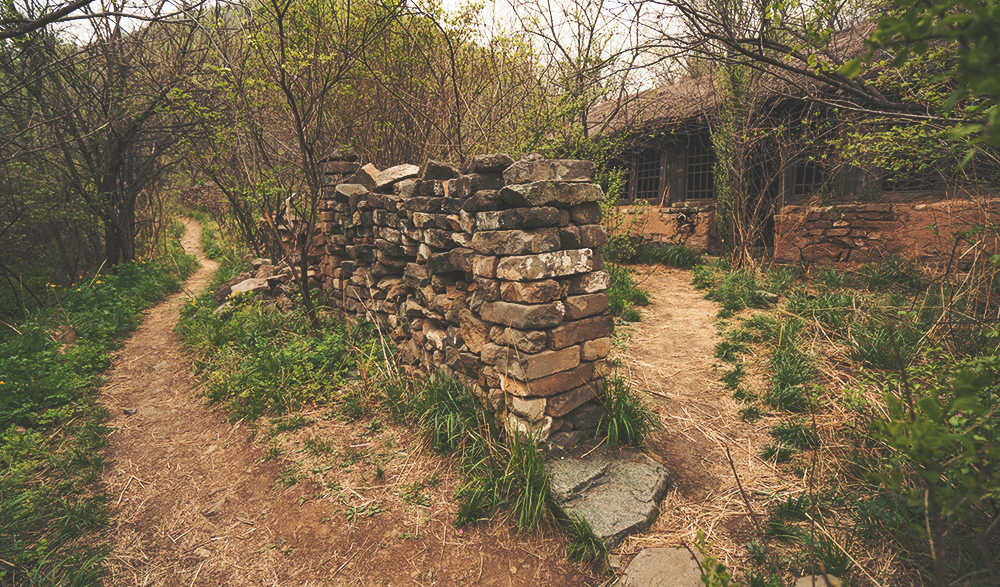 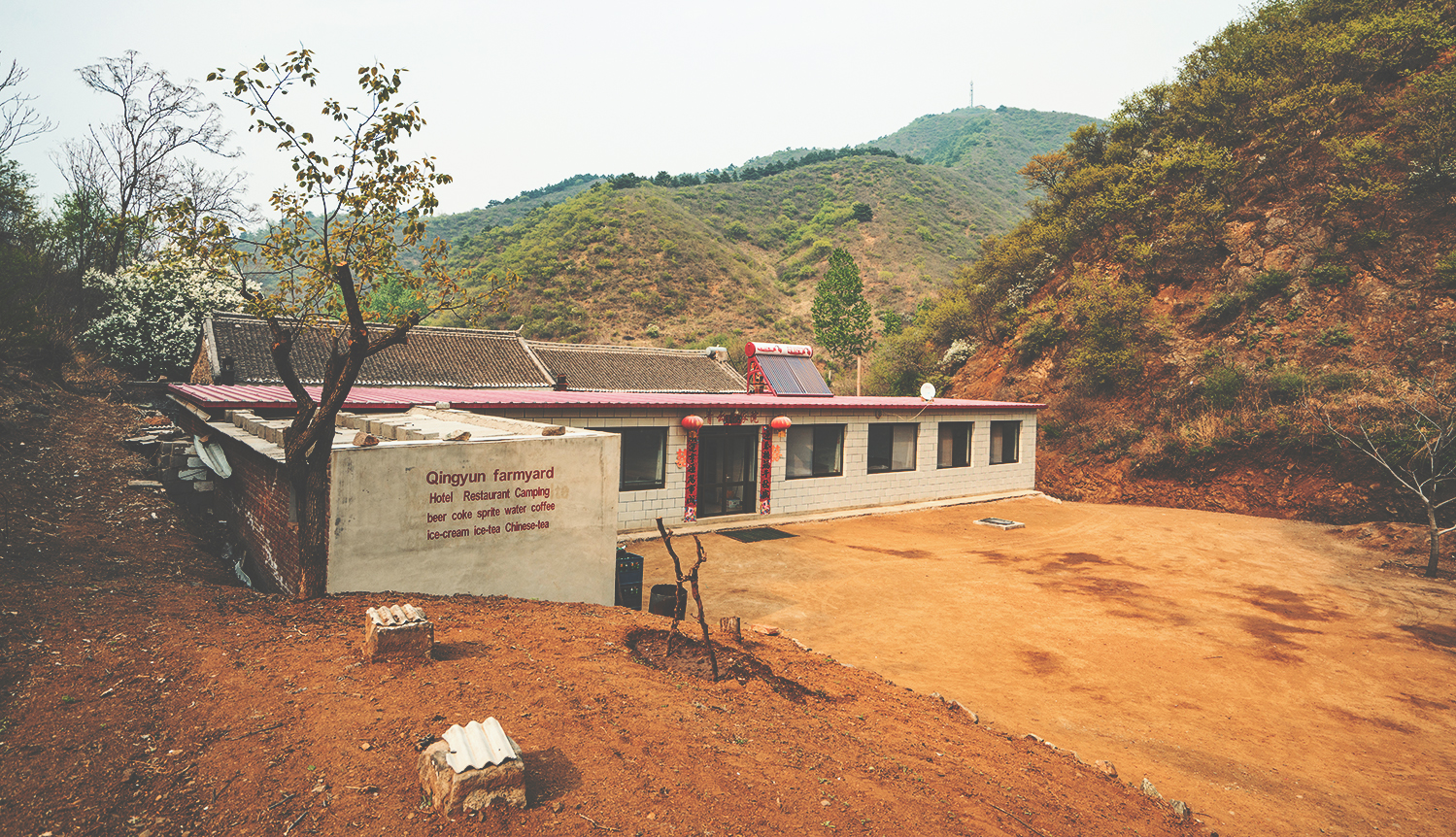 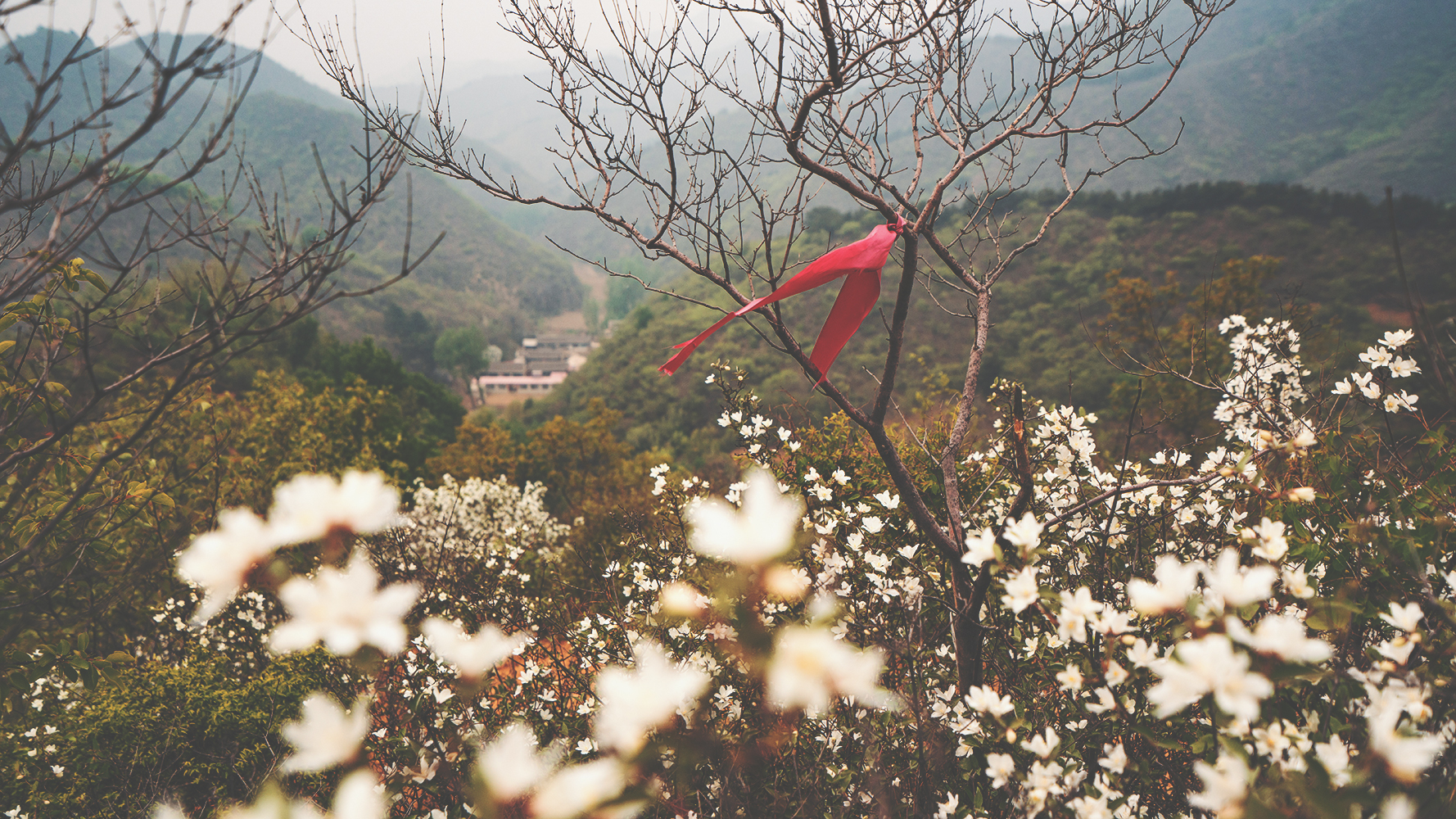 After an hour-long walk we reached Qingyun Farmyard. It had rooms available, drinks, and food. Unfortunately, it was closed so we could only stare lustfully at the refrigerated beer through the door. I did a quick check and yelled a couple “ni haos”, but alas – nothing. It was time to look for a place to camp, so we went up the hill toward the Wall. Along the way we spotted an old woman lighting firecrackers (to scare birds, we assumed). I asked her if we could buy some stuff from the store in order to build up our rapport before asking if it was OK to camp by the village. We walked with her to the village and, after seeing that the hostel was still closed, she pointed us to her place. We followed and she had two baskets with warm beer bottles. She handed one to me. I asked her how much. “Five yuan,” came her reply. I gave here 10 yuan, but there was no change – she didn’t have any. By the time we found a 5 yuan bill, it was too late the get the change back. She smiled and pointed at her closed pocket with the 10 yuan bill. How naive of me. 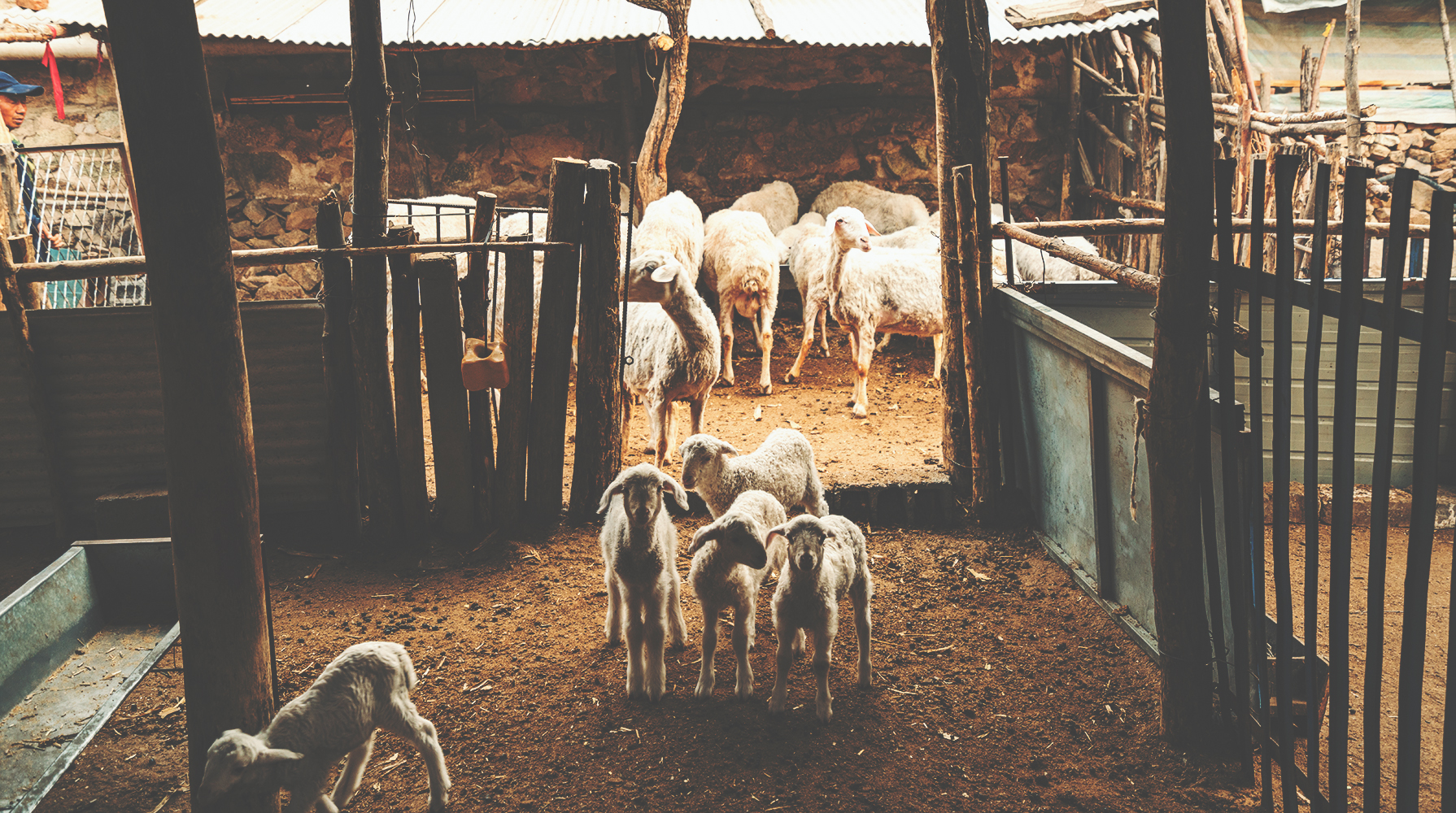 Our options were to either camp by the village or up by the Wall. We considered both and decided to camp by the Wall. It was chilly at night and loud, courtesy of music blaring from a village down in the valley. A lit section of the Wall – possibly Simatai – could be seen in the distance. 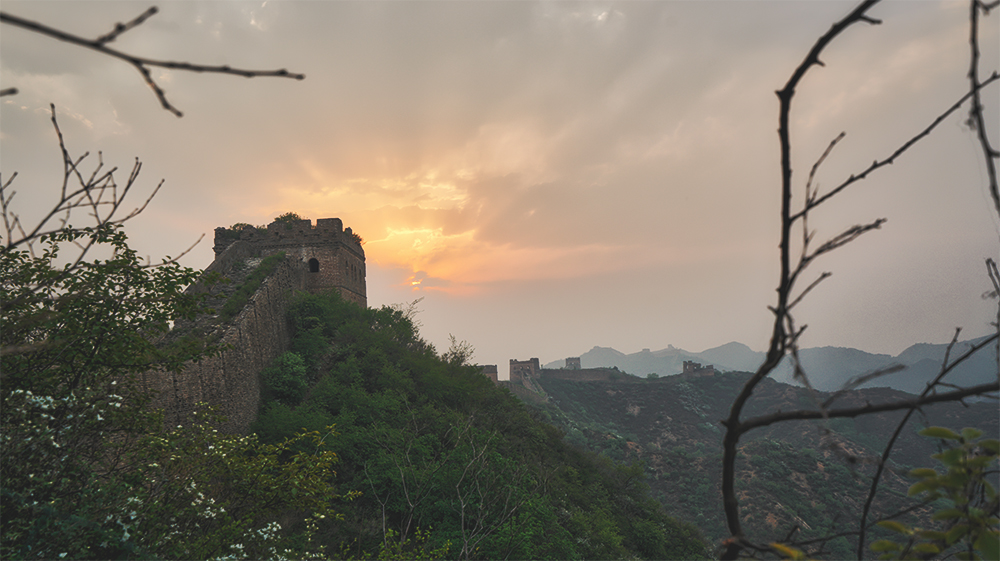 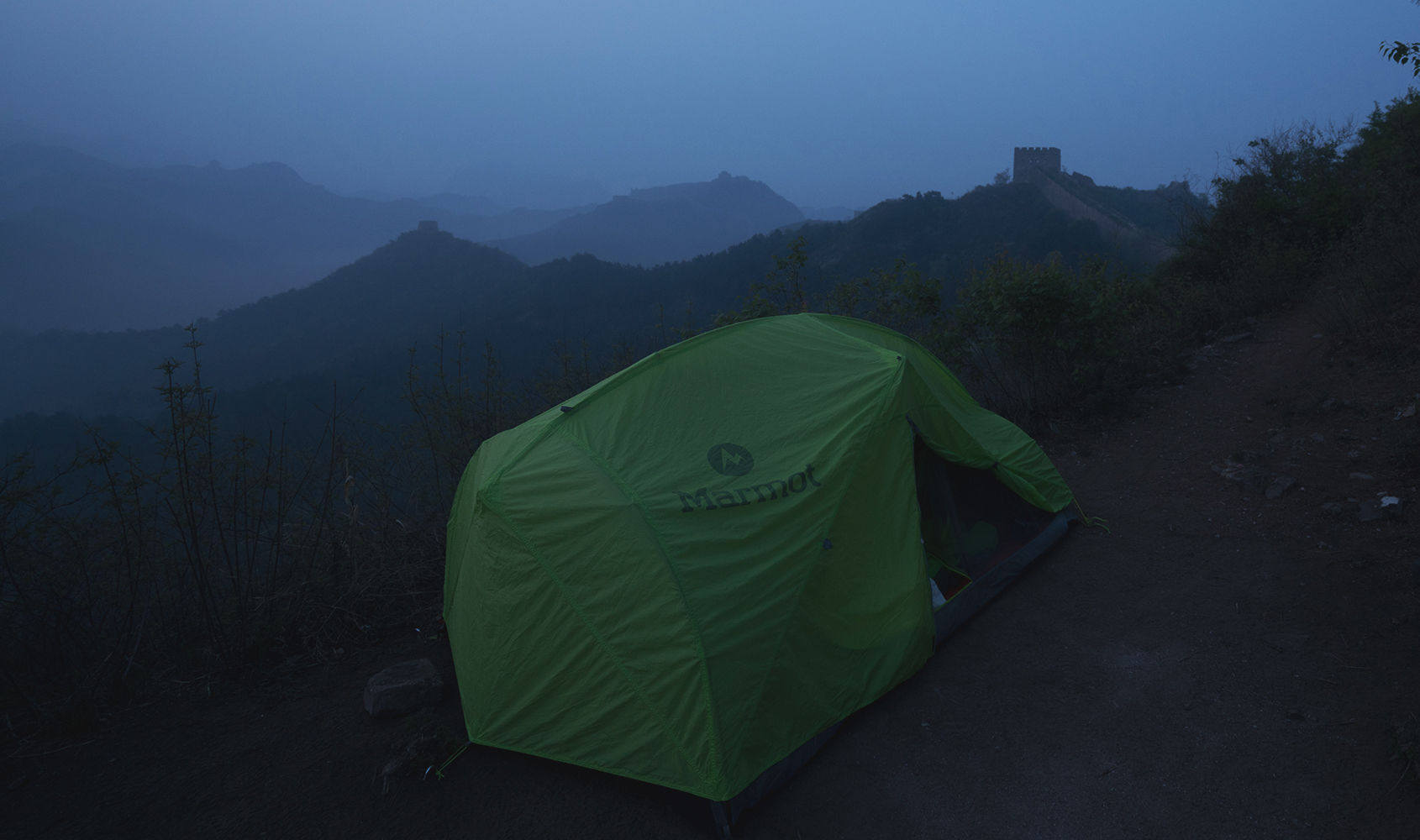 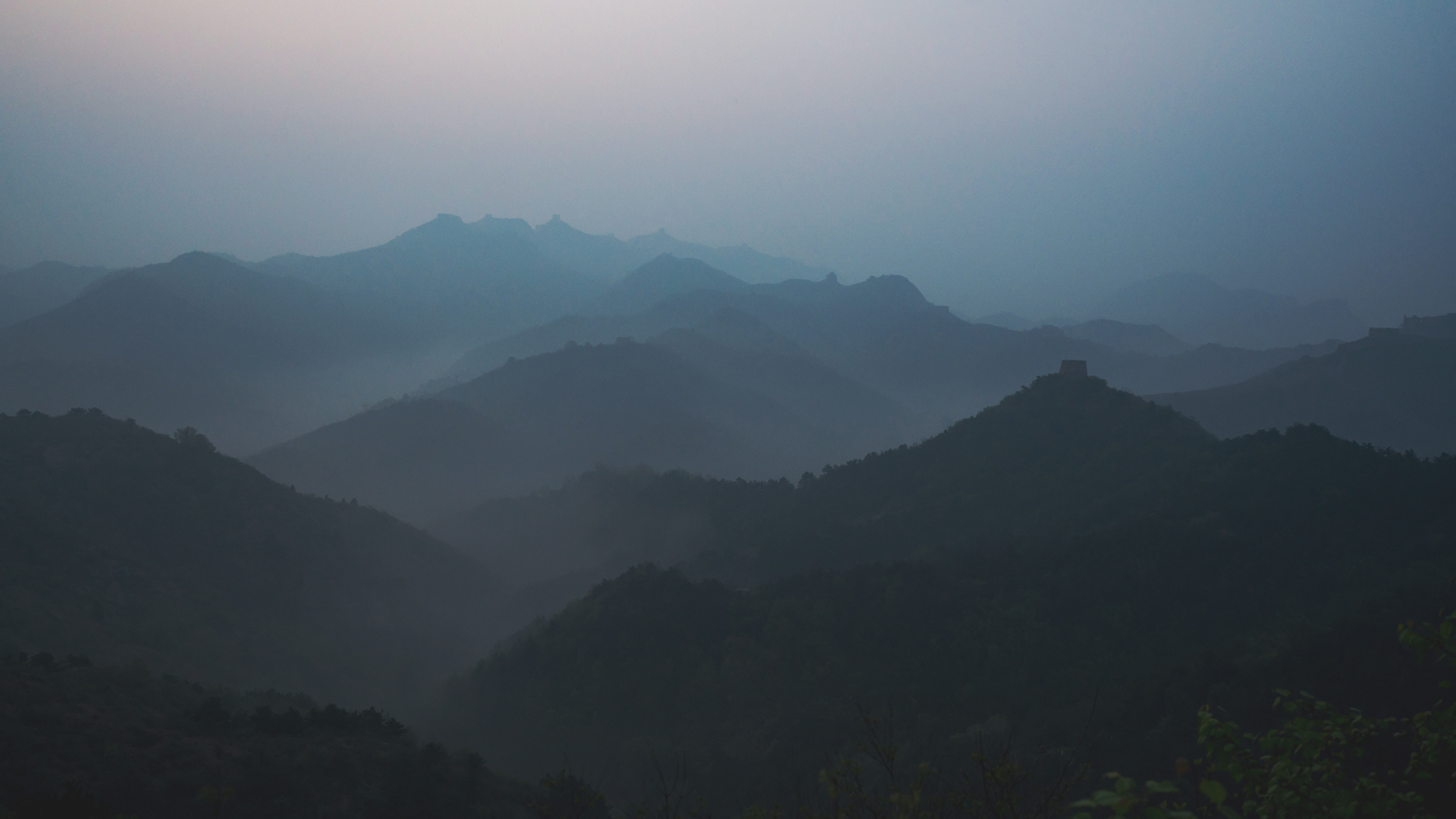 In the morning, the sun pierced through the fog and pollution as we headed to the Jinshanling West entrance. Ready to see civilization, we started the walk at 8:30am when the entrance opened to the public. If you’re planning to hike along this section, allow more time for it than the Gubeikou area. While it has been restored (unlike Gubeikou), there are some steep stairs as you get closer to the touristy area – not that it seems to bother locals running up and down. 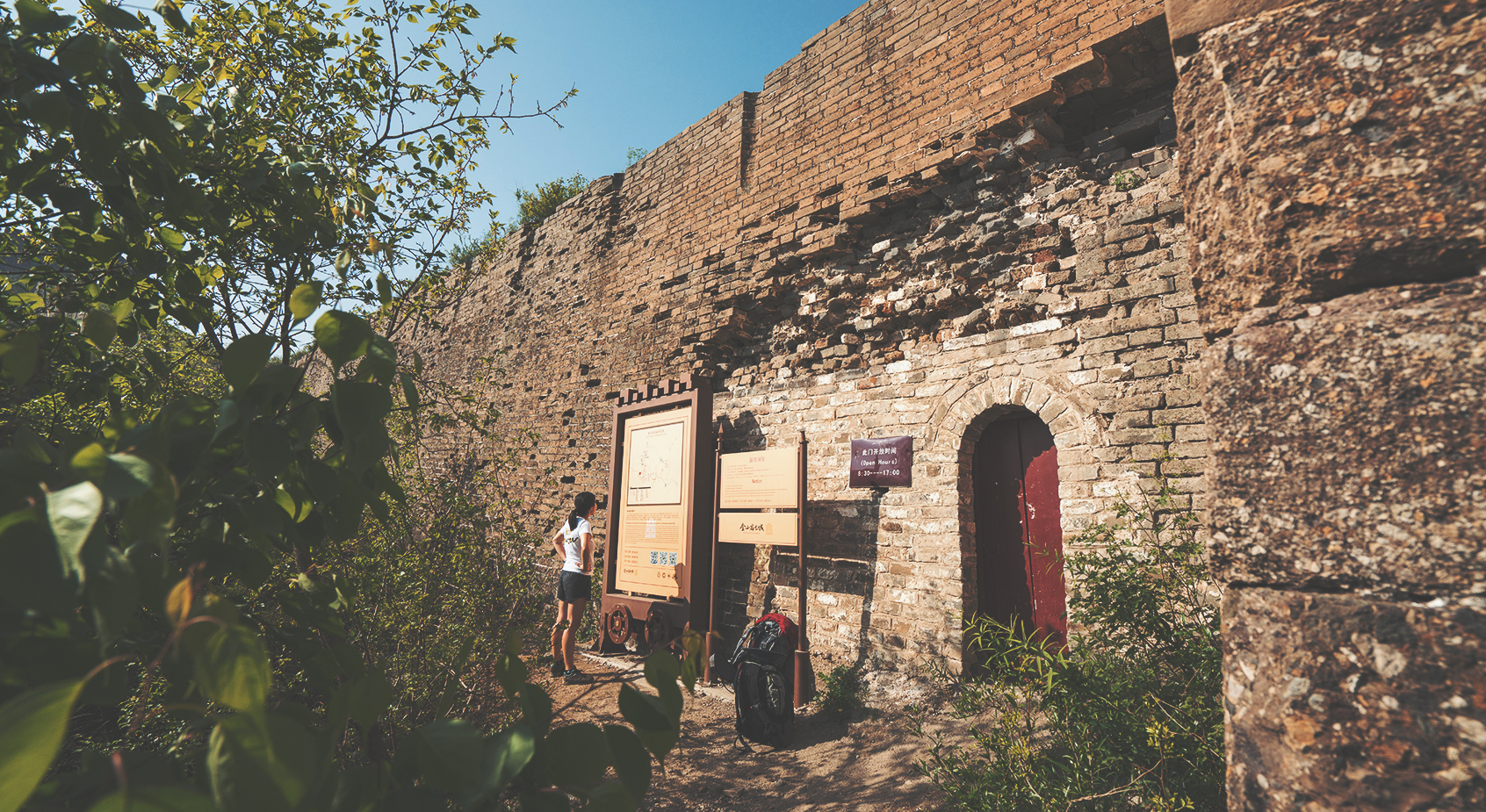 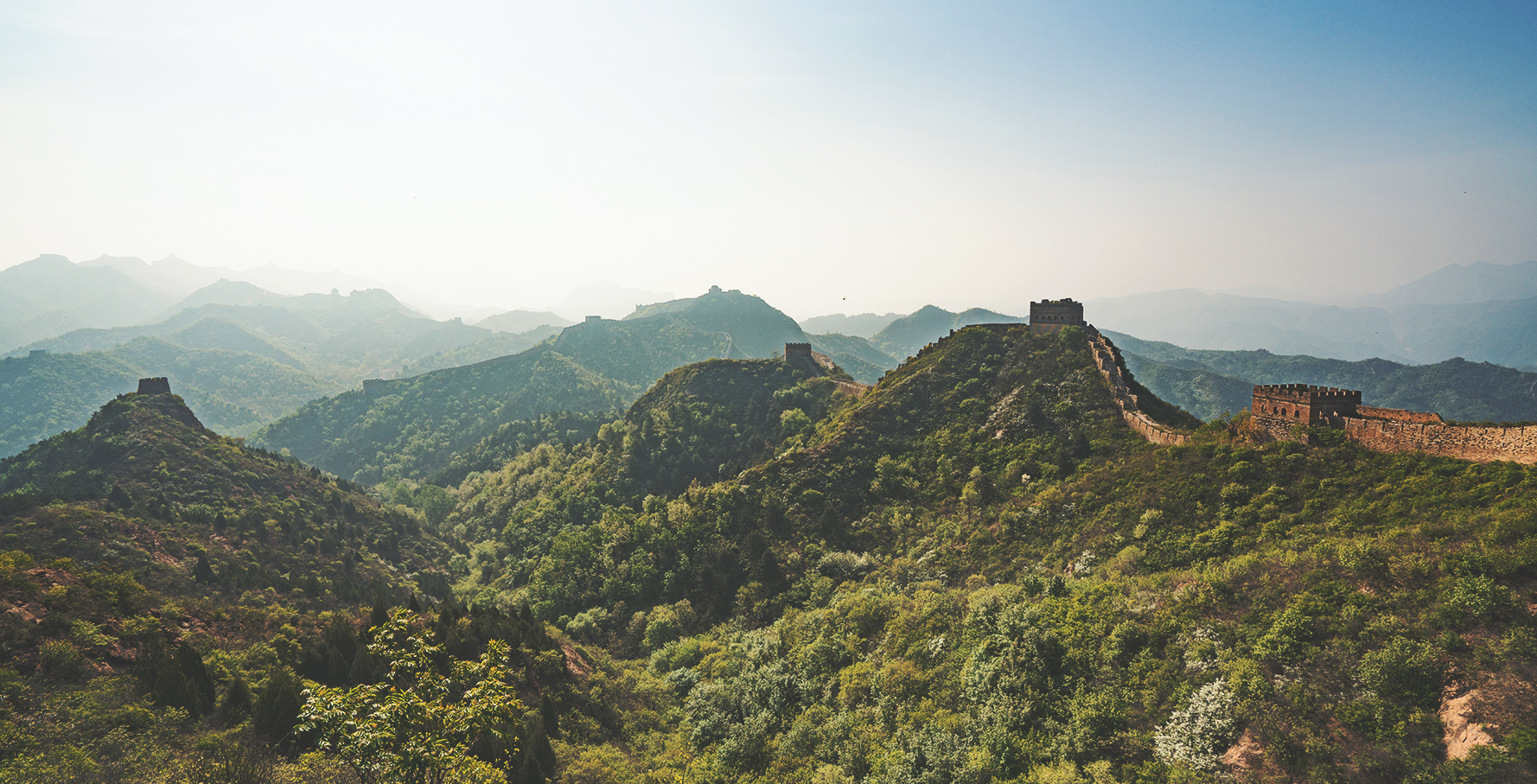 The first sections of Jinshanling don’t have many people; tourists usually don’t go all the way to the West entrance. For a two-day hike, this last section might be a little tough. Our legs were desperate for a rest after completing the East Gubeikou section.
We left the Wall via the Houchuankou Tower, taking a paved trail down to the parking lot. From there you can walk for 30 minutes along a road to the bus station, where a tourist bus goes to Wangjing West in Beijing. This isn’t a safe walk, however, so we hitched a ride to the bus stop with a driver for 10 yuan.
I highly recommend this trail. Just remember to be environmentally aware, avoid littering, and say hi to local hikers (and villagers)! 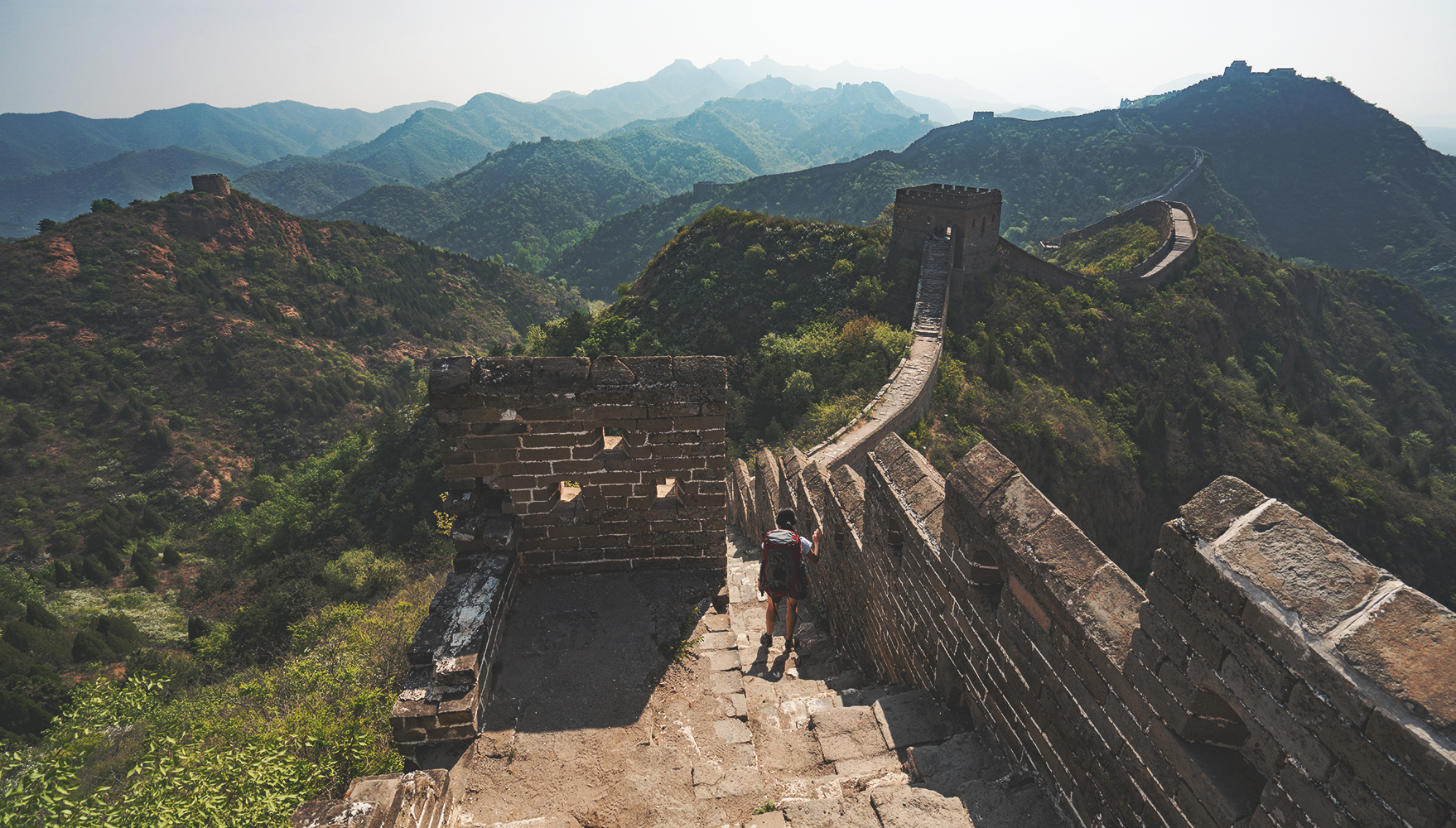 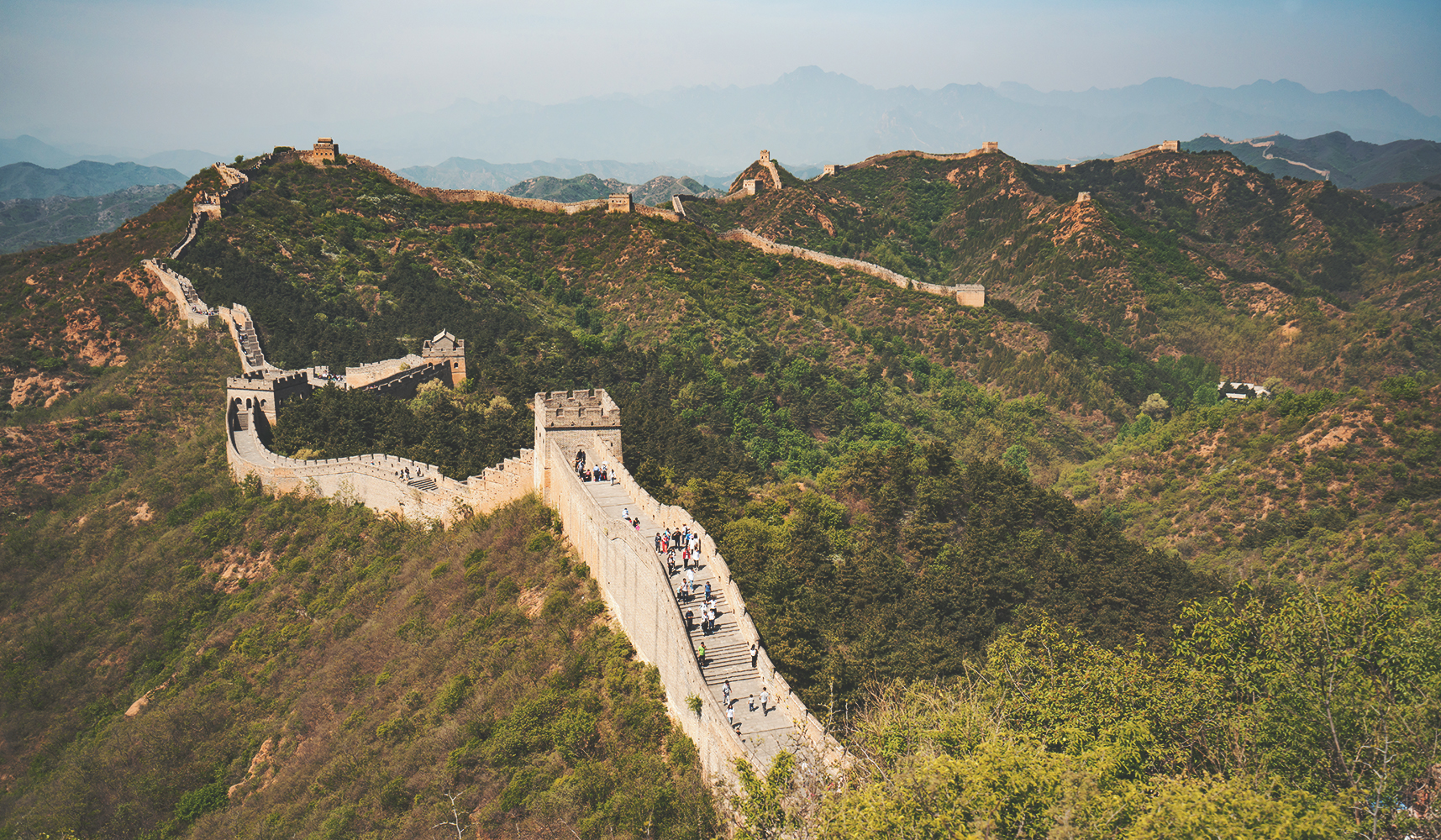