Filming in Wulingyuan with a Phantom3

Traveling in China is like traveling anywhere in the world: it’s almost always a better experience if you’re well prepared. So I did a little research before visiting Wulingyuan, a Chinese national park and a UNESCO World Heritage Site. One suggestion that stuck with me was to stay in the park overnight to not be restricted by the opening and closing times. Although overcast conditions spoiled any chance to see the sun rise, staying in the park proved a wise and convenient choice after our long, tiring days of hiking.

Hiking might not be an accurate statement. All of the trails are either paved or stone paths, from which you cannot venture. That said, it felt like hiking to go up and down the mountains through the dense forests.

There was no information on the internet and there weren’t any aerial videos filmed there, but thinking about it I was confident I would not have any problems getting some shoots there. It’s UNESCO listing and popularity with photographers led me to believe park management with respond to a tourist using a quad-copter to film with interest rather than suspicion.

I anticipated environmental factors that could be a problem, such as interference from birds, finding adequate space to take off and land the drone, navigating crowds of tourists, and dealing with poor weather. I didn’t have much experience flying the Phantom 3 before this trip as I had purchased it just a couple of weeks earlier in Beijing, where there is a GPS-enforced no-fly zone in the city center.

I knew the importance of keeping the drone in sight during flight. If I did lose sight of it, I planned to fly forward knowing that backing it up it should return it to my line of vision.

Despite visiting Wulingyuan during the relatively low tourist season of late June, it wasn’t easy to find locations to safely take off and land the Phantom 3. However, there were areas of the park, such as Tianzi Mountain, where it was easier to find vacant lookout points to use as “launch” and “landing pads.” I used these as take-off points, but often found I had a crowd of curious Chinese tourists eagerly watching the landings. 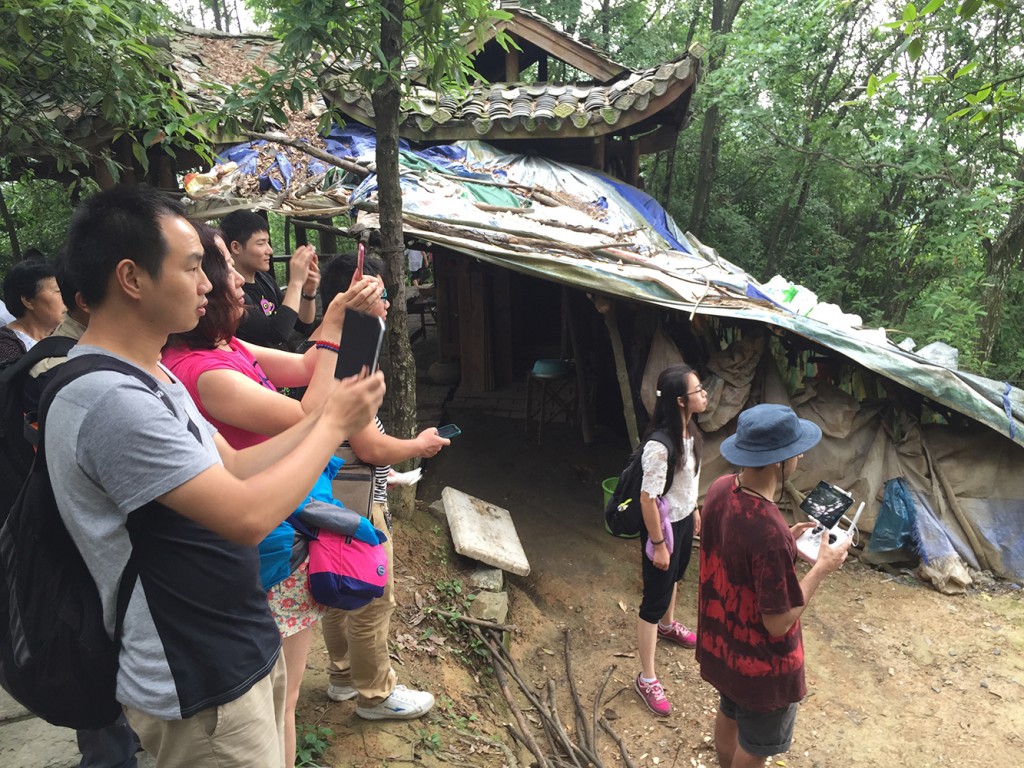 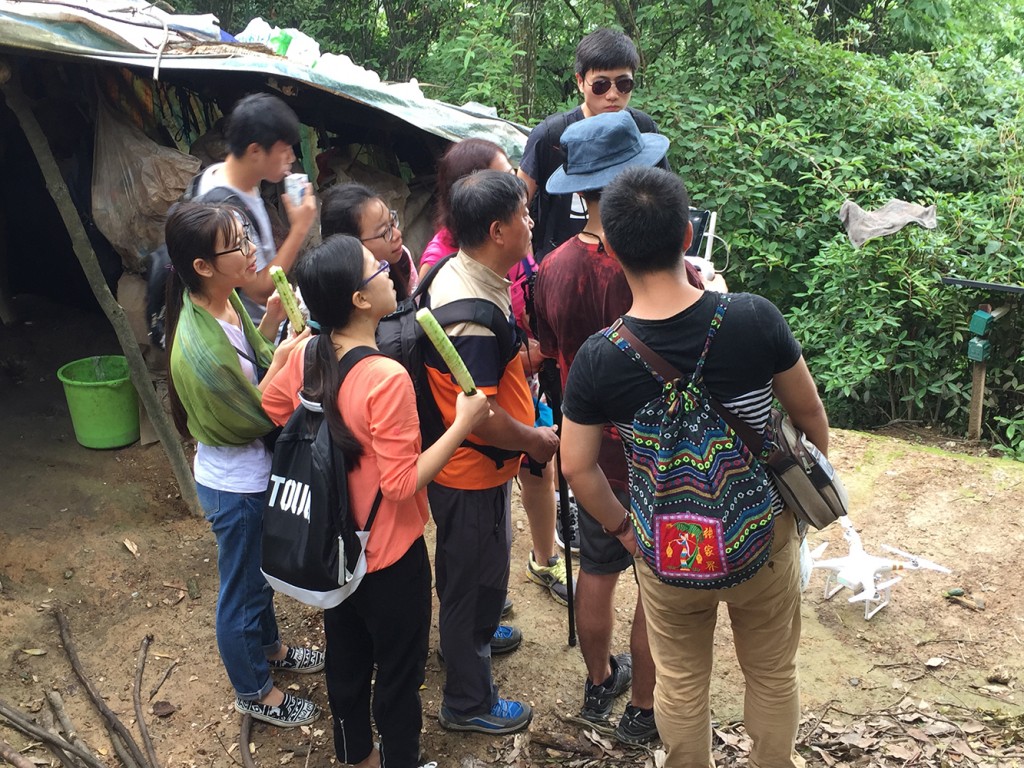 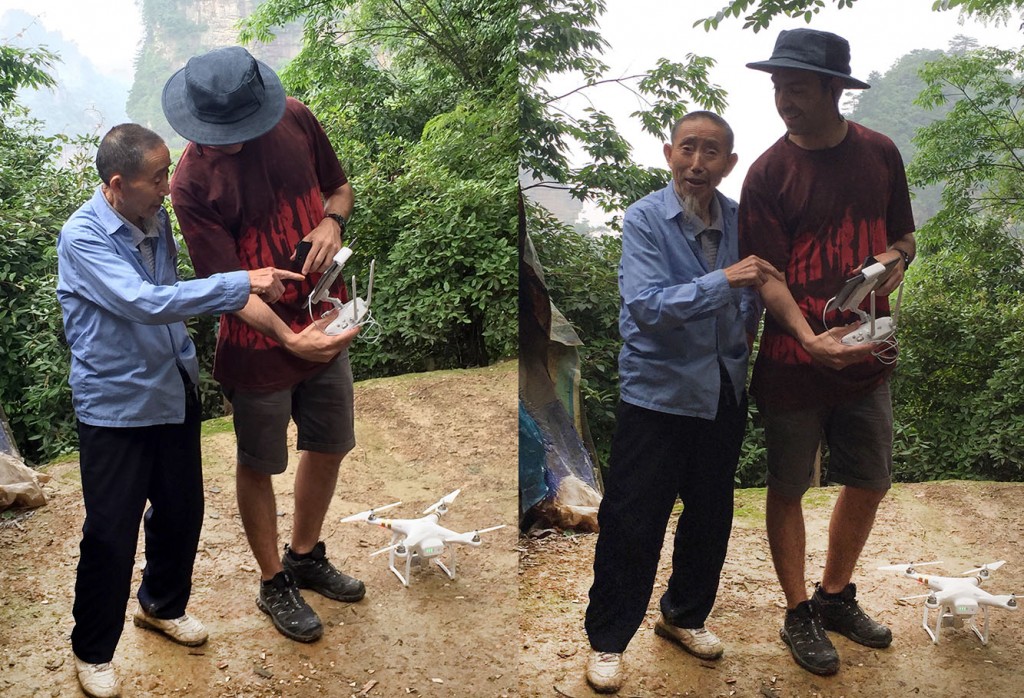 One morning I encountered a group of photographers waiting for the mist to clear and reveal the King’s Brush peak (one of many cool landmark names). They had their cameras ready under plastic covers and umbrellas. I initially thought I’d wait, but I worried about getting on the way of their shots by flying the Phantom 3. Almost as soon as I set up the drone, it became a new attraction for the photographers who began enthusiastically snapping away. Apparently, capturing a round, white flying object is better than just waiting with your camera on standby. I obligingly offered them their new photo subject until the mist cleared, but they subsequently didn’t seem to mind shooting the peaks with my photo-bombing drone in their frame. I exchanged information afterwards with a women that took a bunch of photos and showed interest on what I was filming, interaction with Chinese photographers make the experience more rewarding. 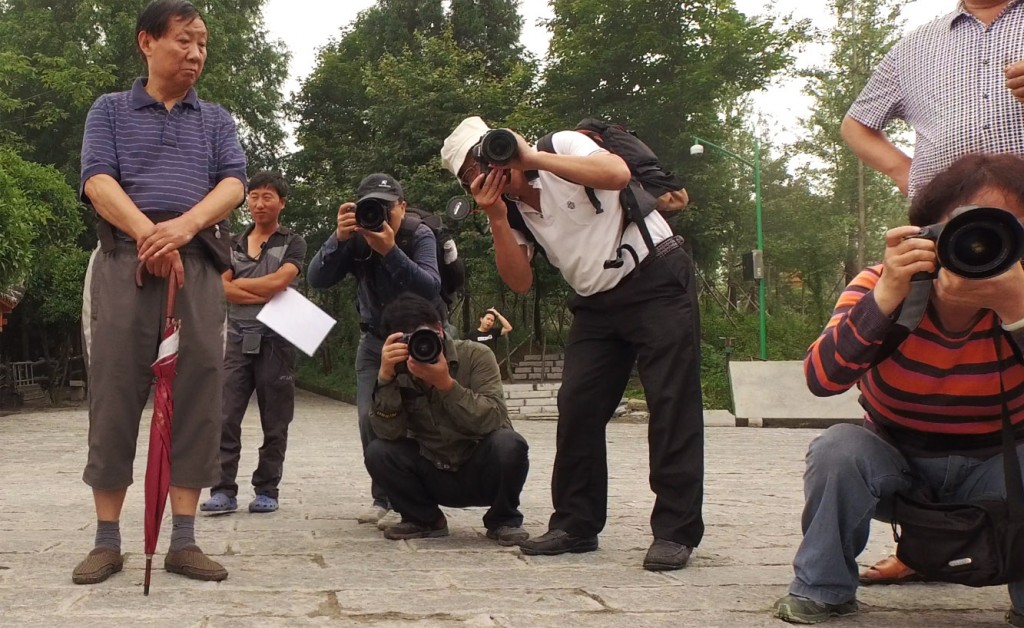 The park has paved trails winding around different areas. Finding an even, flat surface for the quad-copter was challenging. I would have liked to have brought a piece of cardboard or some kind of portable surface to assist take-off and landing. The landing gear did get wet most of the time and when the gimbal did its calibration, uneven rocks came perilously close to scratching the lens. 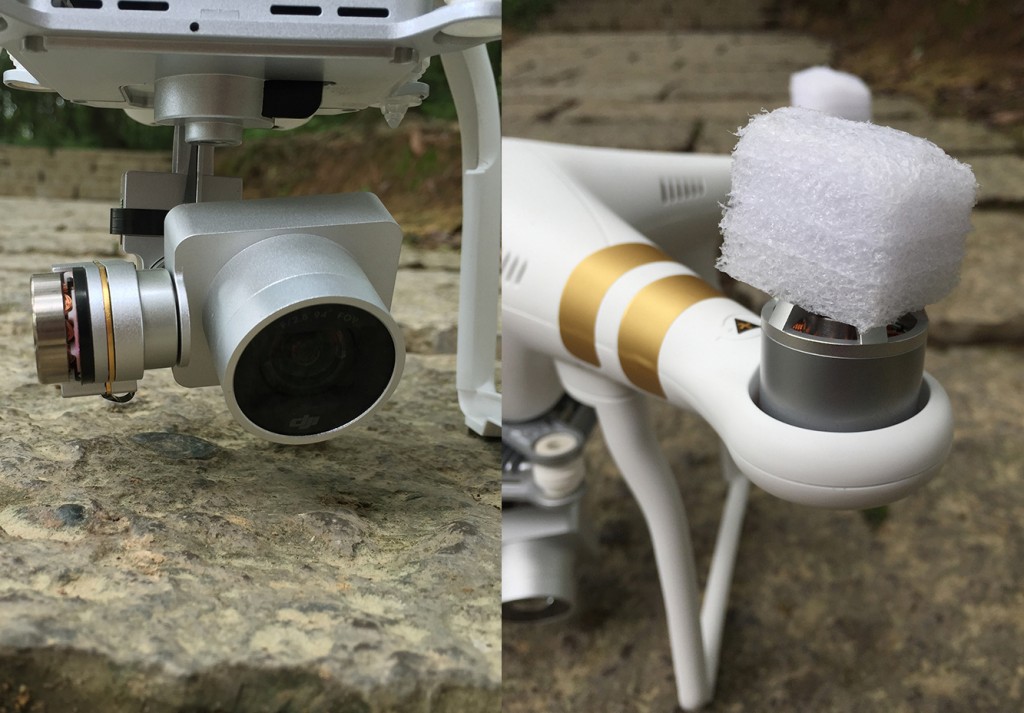 As the weather was not clear all the time, I usually had to wait for the mist and drizzle to clear. We had a good chance to shoot the low clouds after heavy rain, but relentless rain hindered shooting opportunities. While cool and cloudy weather is nice when you’re hiking, these aren’t ideal conditions for flying a quad-copter.

Wulingyuan is a tourist hot spot in China, drawing many Koreans and (naturally) Chinese. While getting around the national park is relatively easy, we opted for an English=speaking guide for the first couple of days to gain the most out of our visit and ensure we made efficient use of our time. 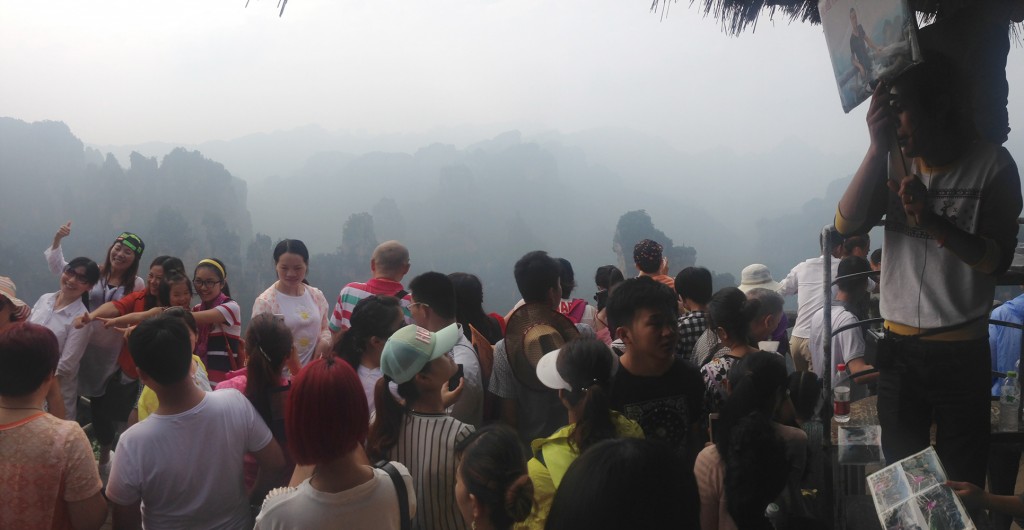 I used a Manfrotto backpack to carry my Phantom 3, remote control, iPad Mini, four batteries, raincoat, water bottle, and snacks. The rain cover that comes with the backpack proved indispensable in the wet weather.

Preparing the drone for flight took the best part of 15 minutes. There were times I wished I had it more ready to take off at leisure. I thought about buying a LowePro Drone Guard Kit, but it’s not convenient for protection while hiking, particularly ascending and descending trails that are especially hazardous when narrow or slippery (or both). The park can be walked through many of its trails. 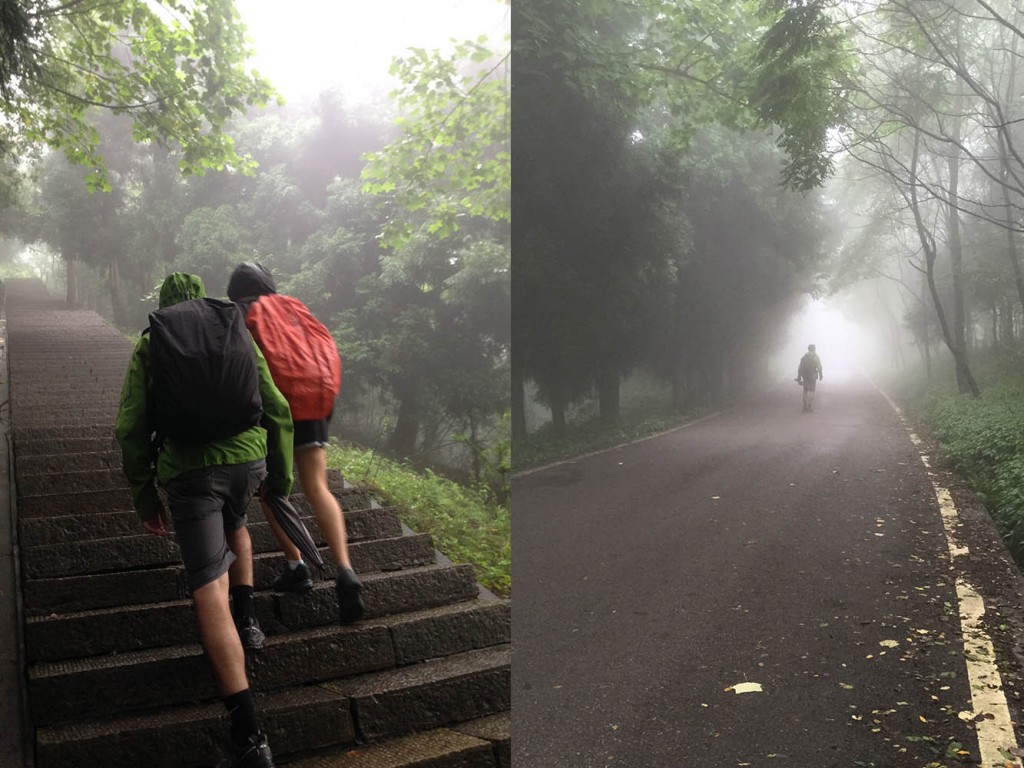 The park is definitely worth visiting; it’s the most unique natural environment I have ever seen. I wouldn’t be surprised if  they ban drones at Chinese national parks in the coming years, as is the case in the US. I recently returned from a trip to Jiuzhaigou National Park in Sichuan Province, where I got a couple shots. Currently, there is no ban on drones. Unfortunately, the same can’t be said about selfie sticks.

The vast amount of people strolling around the park – about half of whom were wielding selfie sticks – made getting around difficult. Now, just imagine if 10 percent of them were flying drones. Not only would the ground would be packed with people, but so would the sky with flying machines. Soon enough, flying a drone will be as easy an accesible as using a selfie stick and pressing one button. Restrictions on drones seems an inevitability in China. Happy filming, while we can.