Into the Heart of Shangri-La

Apart from some trips to “wild” sections of the Great Wall and nature trails around Beijing, my hiking experience in China had been limited before I visited Tiger Leaping Gorge and Shangri-La, Yunnan.

It was unlike many Chinese “nature” tourist attractions. For example, wooden paths and paved trails were sparse. Located near the scenic ancient town of Lijiang, Tiger Leaping Gorge has amazing views and good hikes. Its rugged terrain turns away the “weekend warrior” tourists, attracting true outdoor enthusiasts.

Long fantasied in Western imaginations, Shangri-La, or “sun and moon in one’s heart” in Tibetan, lived up to its reputation as a place rich in mystique and charm.

View of Shangri-La from atop the “Chicken” Temple, so named for its free-roaming fowl.

We would have liked to have traveled straight to Shangri-La from Beijing, but the altitude persuaded us to first fly to Lijiang to gradually acclimatize. At 3,160 meters, it only takes a gentle ascent at Shangri-La to remind you how thin the air is.

The one night we spent in Lijiang gave us a good sense of the UNESCO-listed town. Its quaint cobblestone streets, snaking canals, and the imposing backdrop of Jade Dragon Snow Mountain make almost any photo a picturesque postcard. However, our interest was in the outdoors. We therefore headed to Shangri-La quickly to have time to explore the main town and visit Pudacuo National Park.

Our bus ride from Lijiang to Shangri-La took close to five hours. The last hour was on a long straight road still under construction. Shangri-La’s old town, much of which was burned down in 2014, is still recovering.

The Tibetan and Naxi influences give the town much of its color and character, distinguishing it from other Chinese (and even Yunnan) cities. Walking around the old town, even the same alleys multiple times, was a total enjoyment.

I had wanted to get some aerial shots, but the proximity of the airport made that impossible. In any case, a giant prayer wheel (reputedly the world’s largest at 22 meters and 60 tons) also made it culturally taboo. Therefore, I tried to be as unintrusive as possible when filming (even though it’s hard to be discreet filming handheld with the drone). 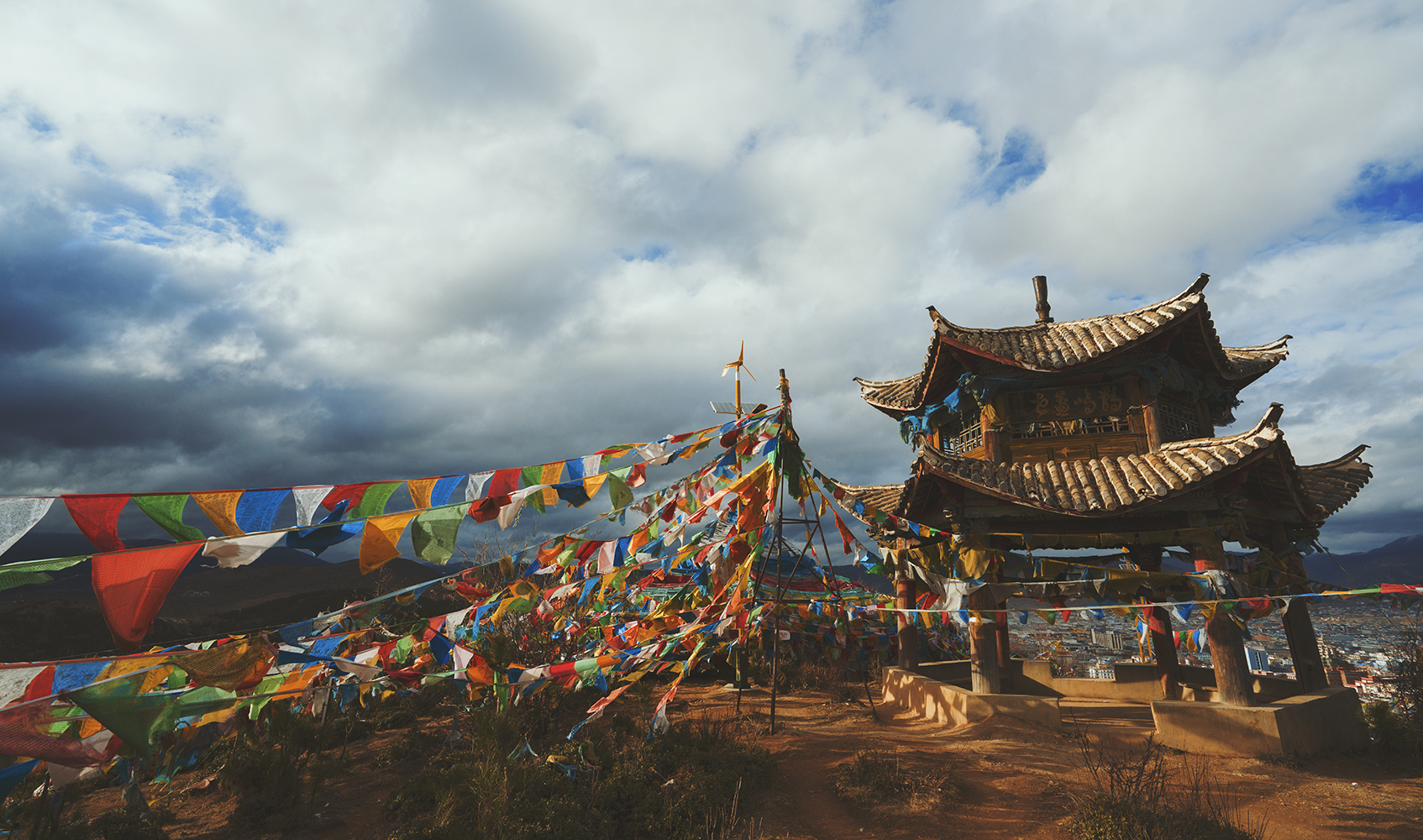 The Chicken Temple at Shangri-La offers a magnificent view of the city.

The day before we left for Tiger Leaping Gorge, we experienced one of the highlights of our trip: a group of Tibetan women pushing the giant prayer wheel. Hearing their sacred chants fill the air provided a humbling reminder of the site’s cultural and religious importance. 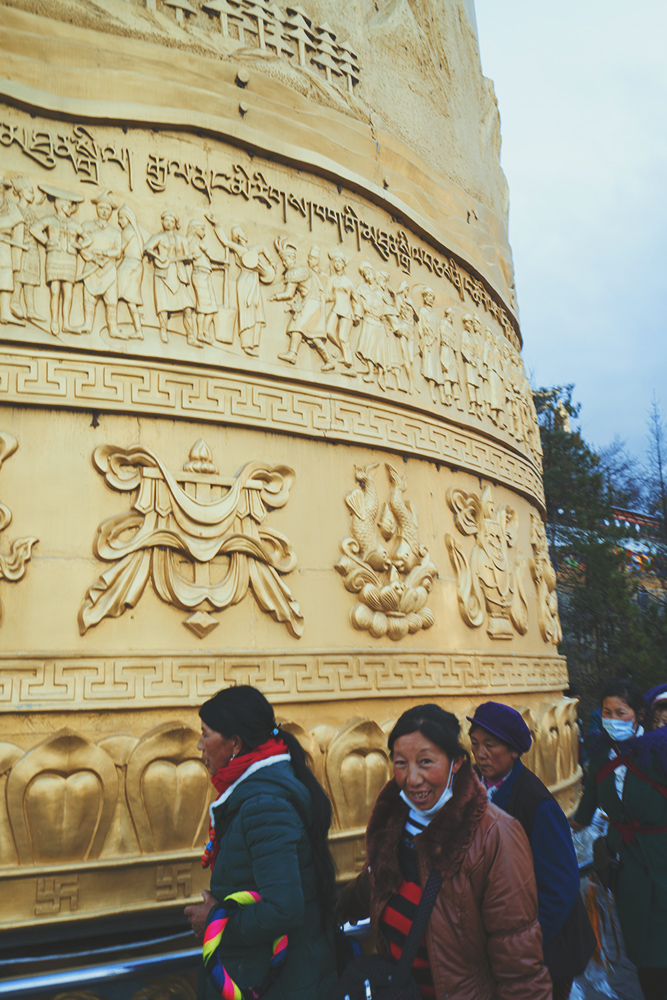 A local woman smiles as she chants and pushes the giant prayer wheel. 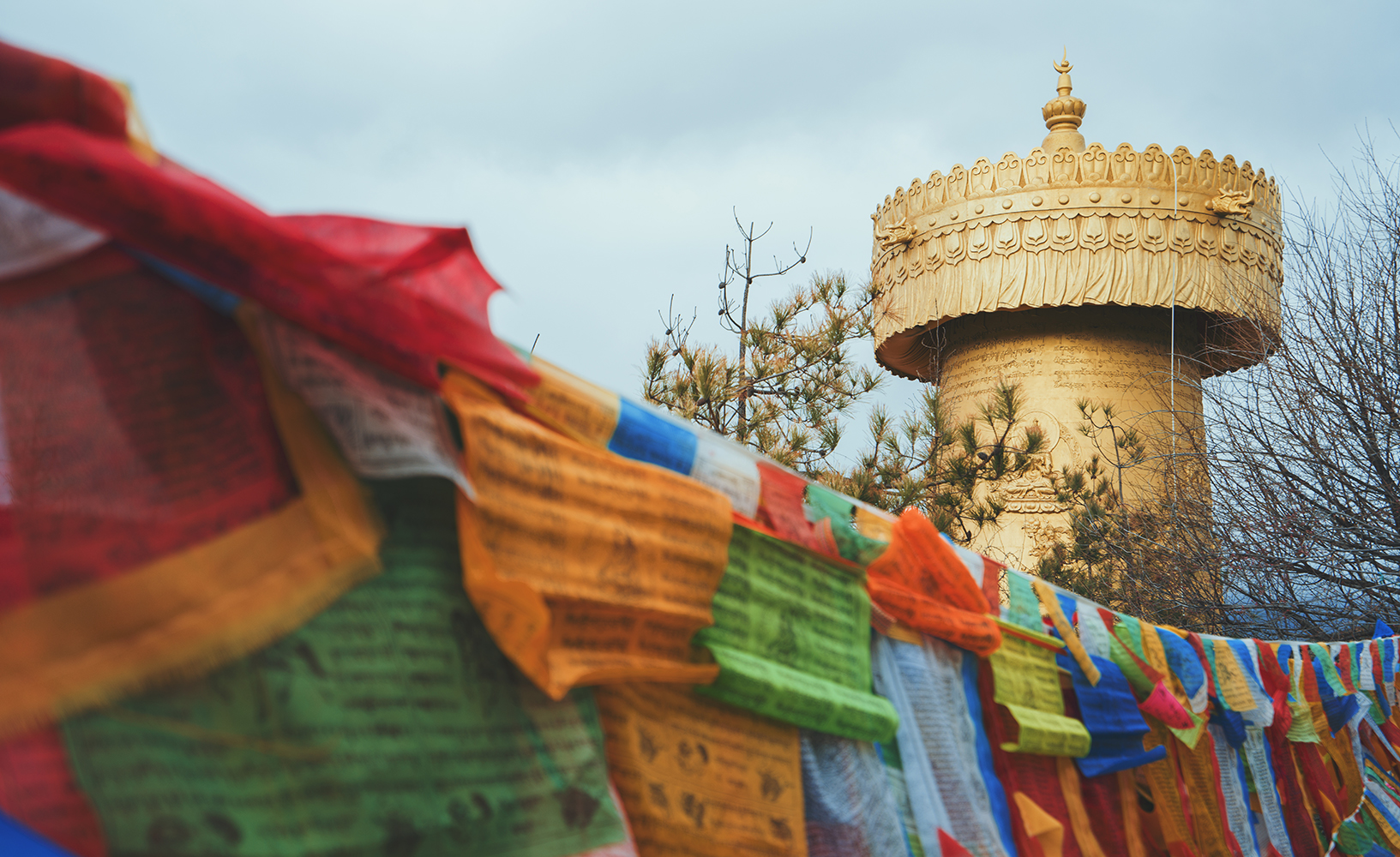 The praying wheel needs 6 to 8 people to make it turn.

With its lush terraced mountains and mild tropical climate, Yunnan is renowned as China’s “coffee province.” In my mind, Shangri-La is home to the best coffee in the country. Upon seeing coffee shops in the old town, we remembered that Shangri-La Farms is the coffee we usually buy in Beijing.

It was nice to see local coffee shops serving different blends, mostly Arabica variations. Even though tea will always be China’s national drink, coffee is growing in popularity and it’s great as a traveler to find decent places to unwind over a cup. 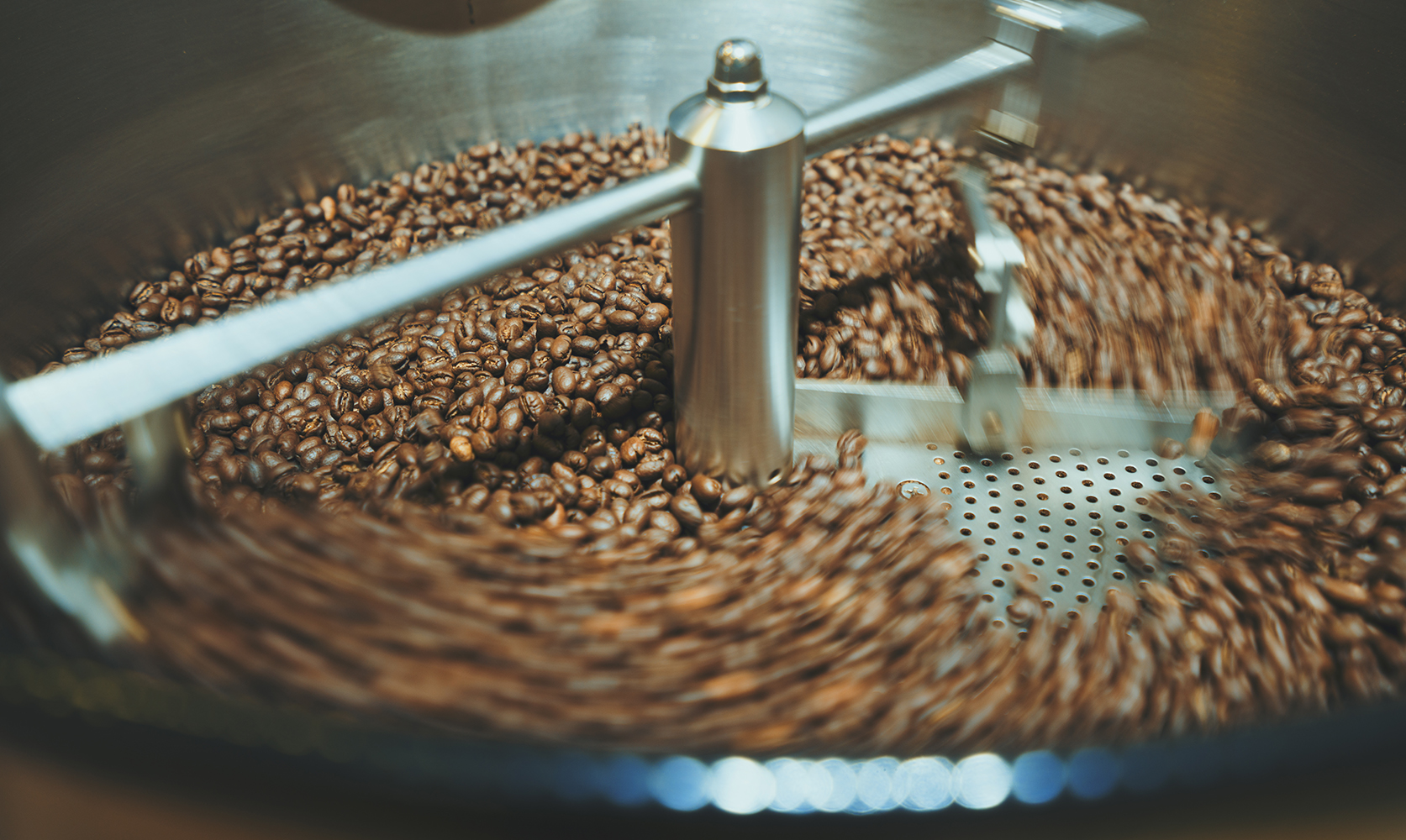 The rich aroma of local coffee fills many of the bustling cafes in Shangri-La.

On our second day, we visited the Songzanlin Monastery. The largest Tibetan Buddhist monastery in Yunnan, it is located a 30-minute bus rides from the town center.

Walking around its arching pavilions, I thought about how great it would be to film from the air. Nearby, a Chinese tourist shared this idea and was in the process of preparing his DJI Mavic for flight.

However, a polite reminder from a temple official grounded any hopes of aerial footage before his drone (or mine) could get airborne. Fortunately, a short walk around a lake offered excellent vantage points for filming. 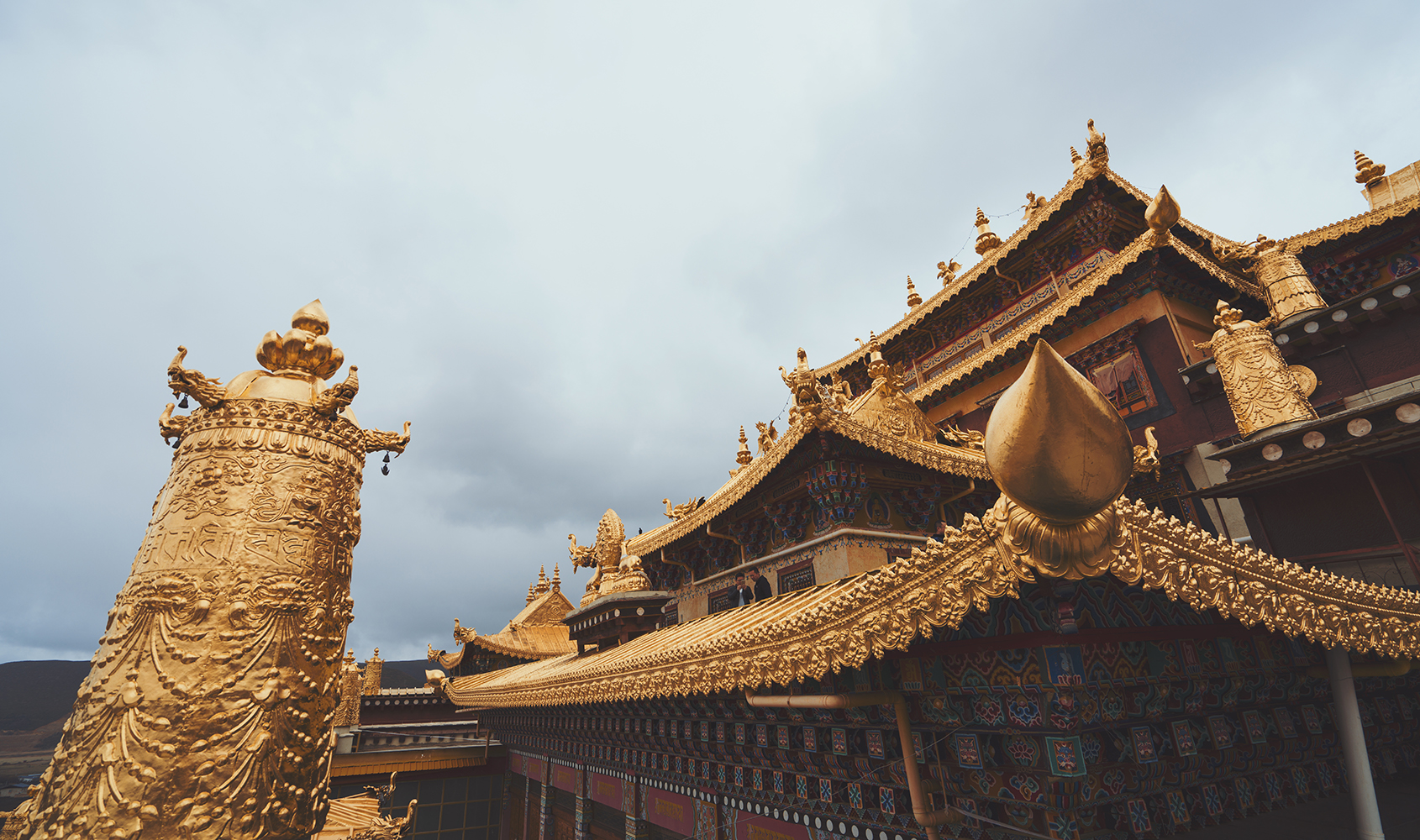 Songzanlin Temple was founded in the 17th century and fell on hard times during the Cultural Revolution. 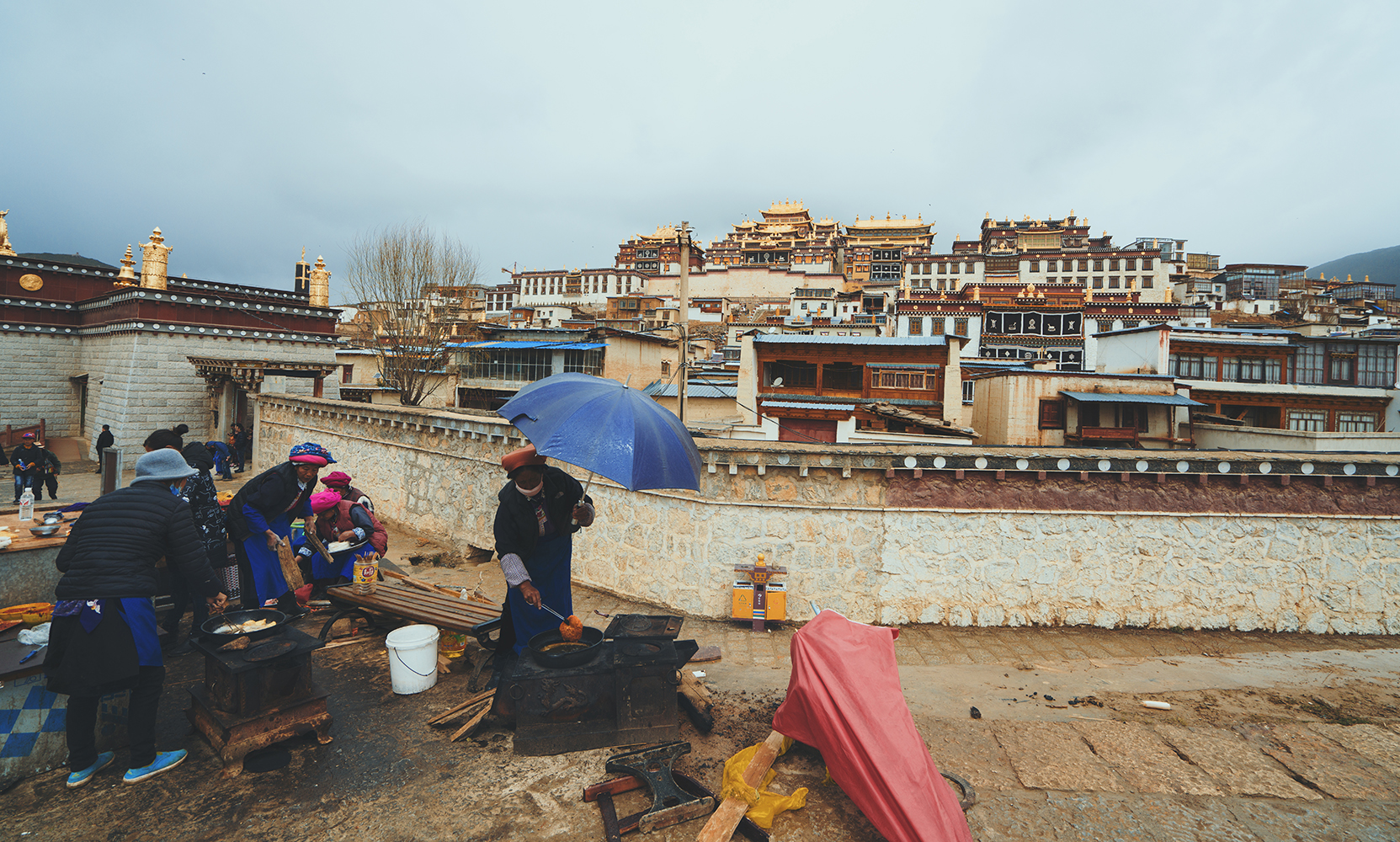 The monastery is a popular spot for vendors selling snacks and refreshments.

On our third and final day in Shangri-La, we visited Potatso National Park, known in Chinese as “Pudacuo,” situated 22 kilometers from the county’s center. Although guesthouse staff recommended us to allow six hours to see the 1,300-square-kilometer park, we could have easily spent an entire day there.

The impressive landscape of deep valleys, dense vegetation, and roaming yaks make it a perfect location for aerial video. There are many options for creative compositions. I was conscious of not disturbing the tranquil surrounds with the noise of my Phantom 3 any more than necessary, thus I limited my amount of aerial footage.

At an altitude of 3,500 meters, Bitahai Lake was the last section we visited at the park. Some tourists breathed from cans of oxygen sold at the entrance of the park, but the environment isn’t too challenging for a person of reasonable fitness walking at a steady pace. 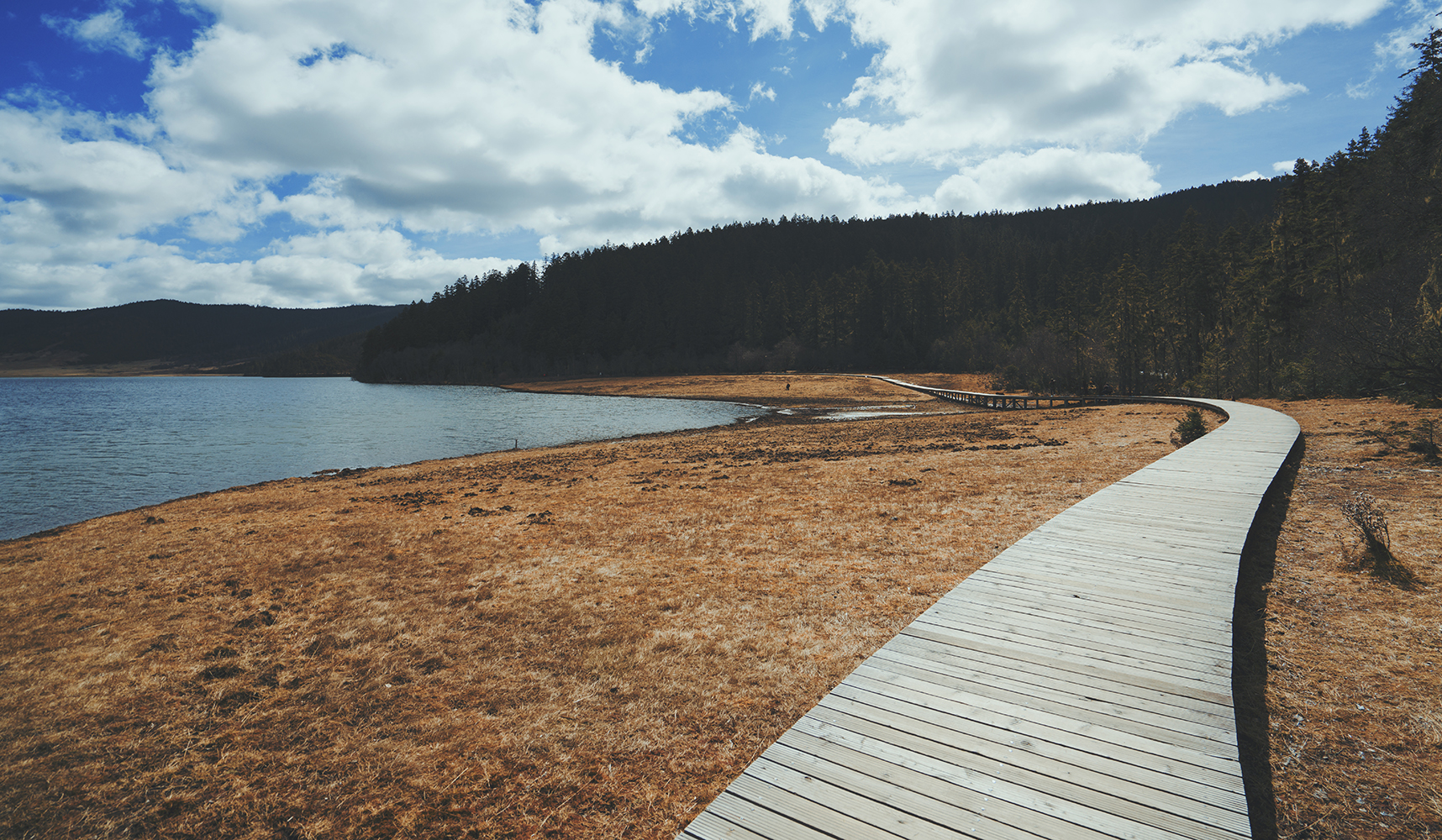 Shudu Lake is one of the first sights at Potatso National Park. 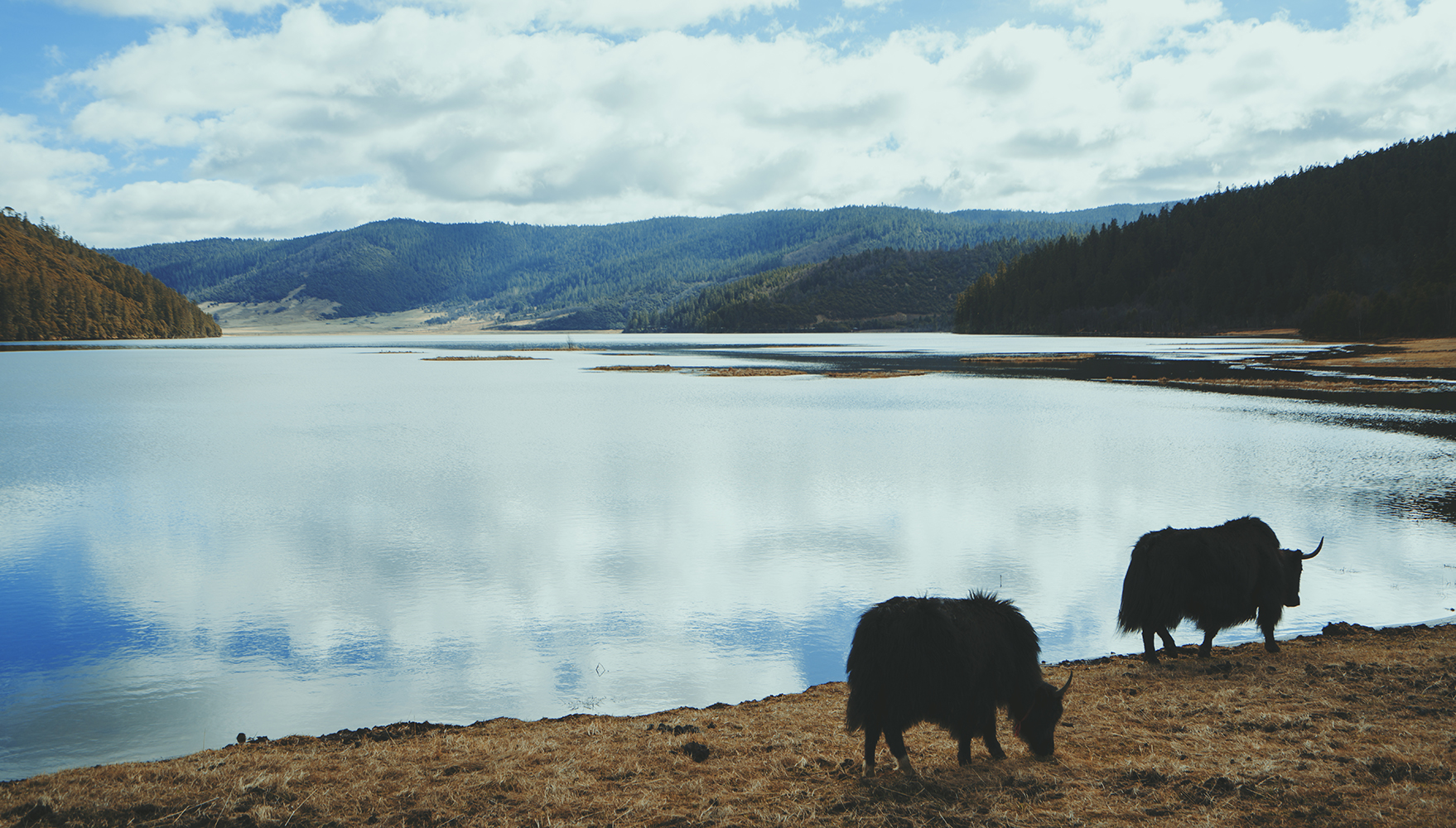 Yaks grazing near the lake are oblivious to tourists. 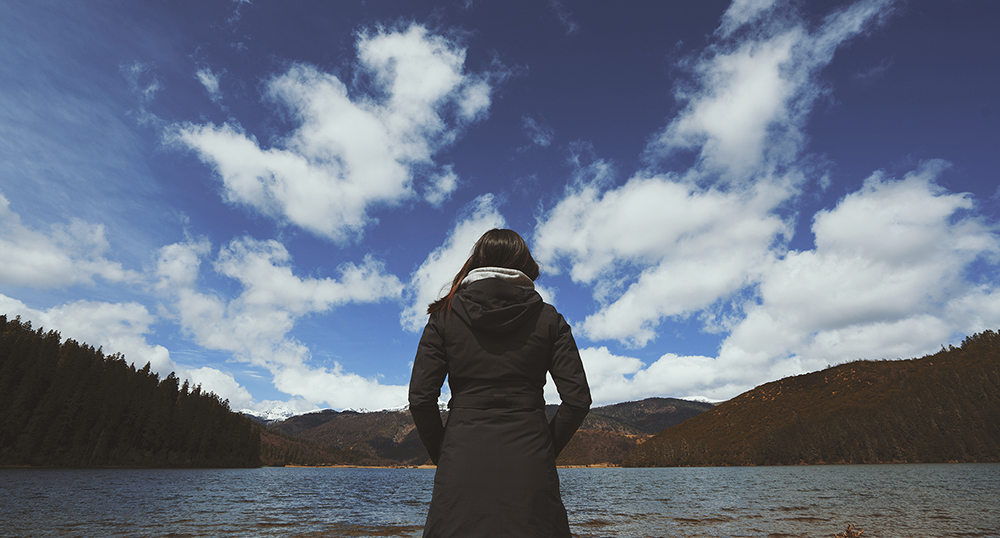 Militang Alpine Pasture offered the best view of the valley. Quite simply, it is an excellent spot for aerial footage. Seeing vast plains dotted with yaks slowly treading around giant crystal lakes was breathtaking.

Of course, the tourist bus doesn’t always allow adequate time to appreciate these views fully, so we simply waited for the next one to come along. Although the 20 minutes at each stop is enough time for a few selfies, it’s worth taking a bit longer if you’re not in a hurry; just hope the next bus isn’t too crowded! 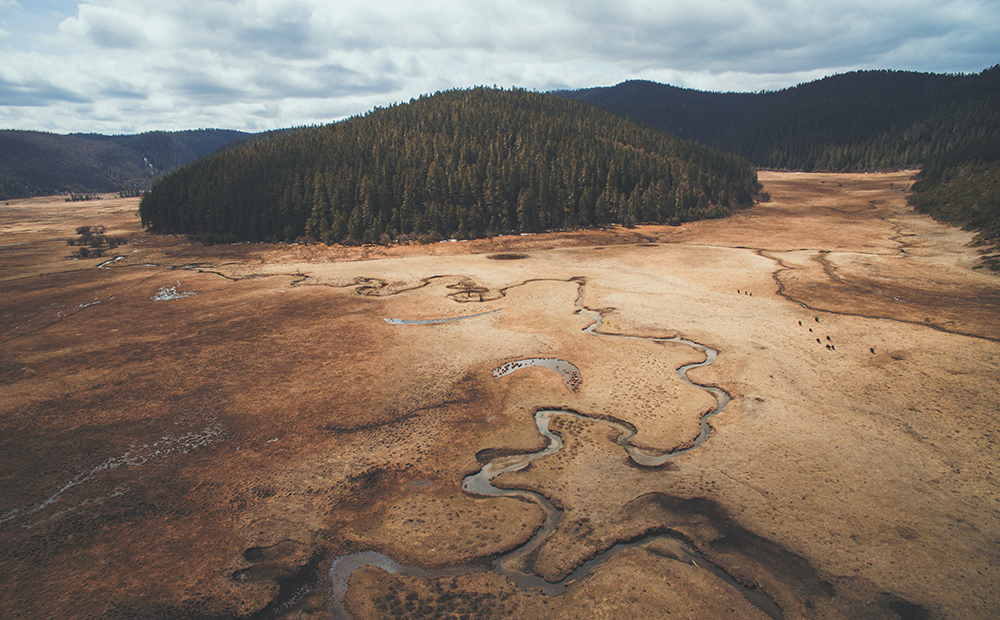 Militang Alpine Pasture is a must-shoot location for aerial photography.

The final (and most anticipated) leg of our trip was Tiger Leaping Gorge, Yunnan’s most famous canyon. There is abundant online information about hiking routes and tours, which makes planning easy.

From Shangri-La, it is relatively short bus ride. After arriving at Qiaotou, the small gateway town to the gorge, we went straight to the base of the canyon to see the might Jinsha River (literally “Gold Dust” River).

We shared the road with trucks and a few vans that offered us rides to our guesthouse. Construction is constant in China, even in remote mountainous regions. The sight of mining and roadwork by the river was present throughout the trail. 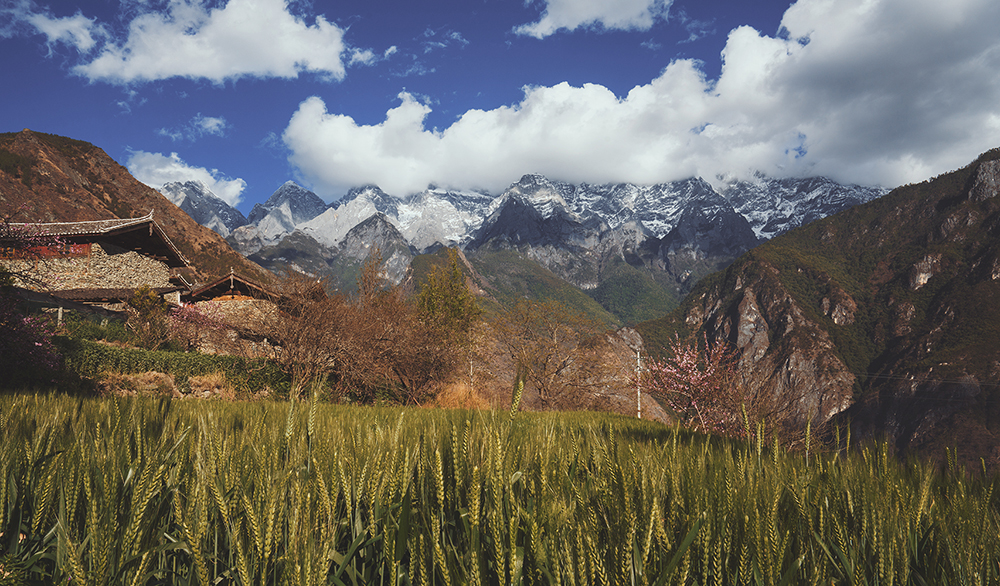 Jade Dragon Snow Mountain as seen from the beginning of the Tiger Leaping Gorge trail.

Our four-day hike took us around the gorge, offering impressive views of Jade Dragon Snow and Jaba Snow mountains with the river below. While some people can hike briskly through the canyon in one or two days, I was glad to have more time to appreciate the natural beauty. It was certainly a good idea spending most of our trip there, rather than Lijiang or any other provincial city.

Accommodation along the trail was comfortable. However, some “guesthouses” are more accurately hotels, such as Half Way and Tina’s Guesthouse. The mountainfolk hospitality is less apparent at these business-oriented establishments.

By contrast, the Naxi Guesthouse and Sean’s Guesthouse were warm and cozy, not overcrowded, and served excellent local cuisine. From Sean’s Guesthouse, there is a two-hour trail to a hanging bridge. It’s an ideal spot for those wanting to get close to the river, but be safe!

The views from the first stop of the hike were the best. After leaving the next day from the Naxi Guesthouse, we knew we wanted to go back and enjoy the sights over a leisurely morning. 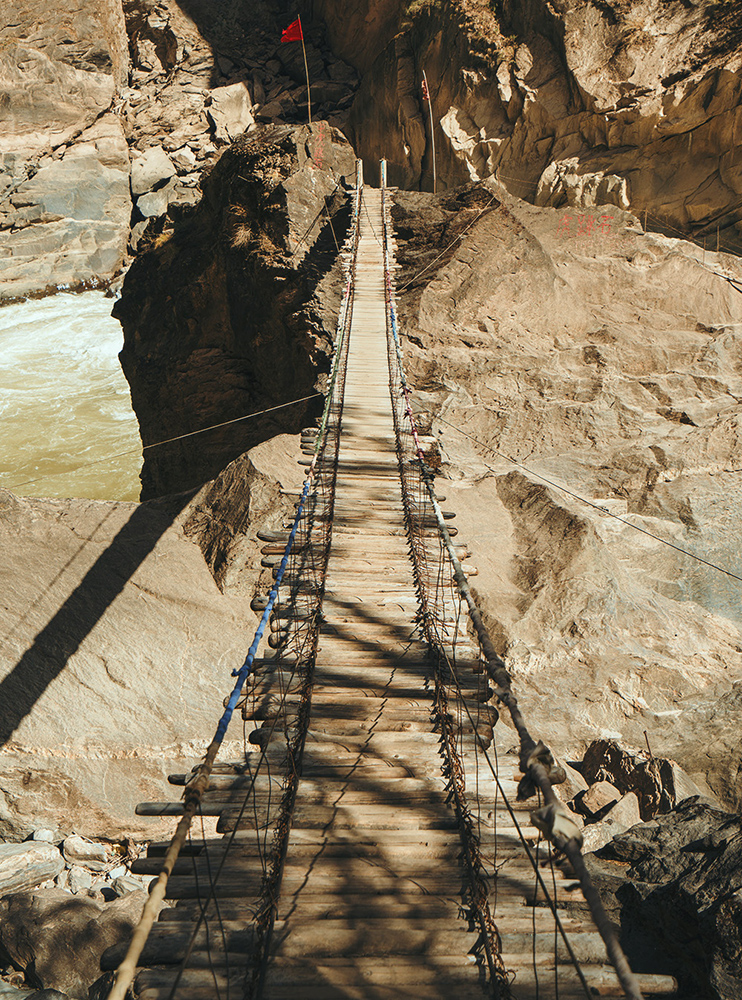 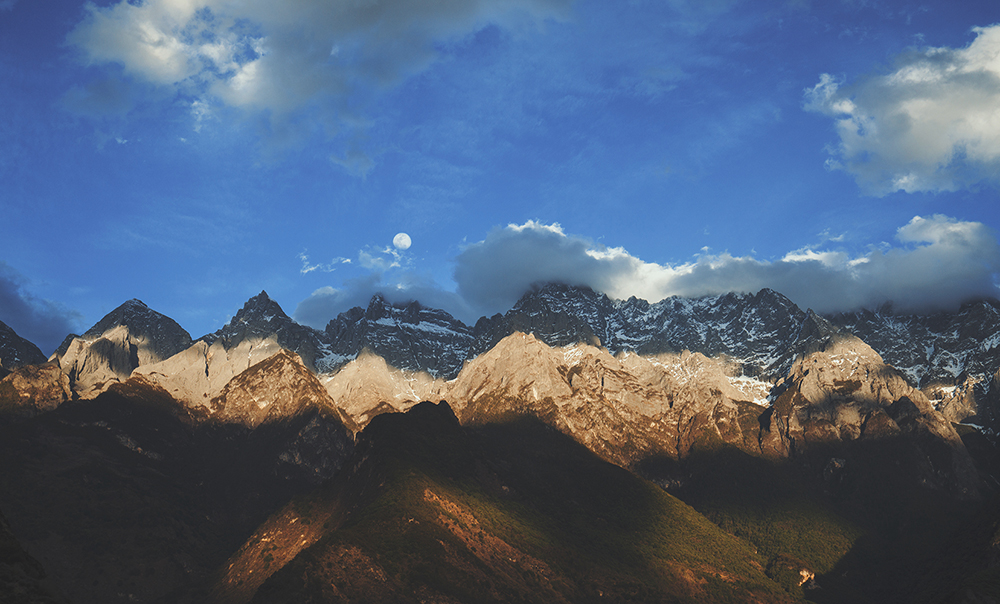 Jade Dragon Snow Mountain, so named because of the shape its peaks resemble.

A final highlight was a close encounter we had with the local wildlife on our way back to the guesthouse: a flying squirrel that descended the hillside through the air, landing nimbly on a tree. Unfortunately, it all happened too quickly for me to capture on camera!

After visiting this part of Yunnan, I am even more eager to explore other areas of the province, like the agricultural landscape painted by the red soils in Dongchuan and the yellow fields in Luoping.